A holiday photography session in Vietnam

This week marks the end of the Tet holiday or Lunar New Year (please stop calling that the Chinese new year, mostly here in Vietnam!). Like every year I took some time off Hoi An with my family and we traveled to Thai Binh province, where my wife grew up.

Thai Binh is basically located between Hanoi and Ha Long Bay. It is a very flat area, filled with rice fields and small villages. Unlike the South of Vietnam which is more colorful and feels a bit more exotic, the North of Vietnam has a “colder” look to it, more influenced by the conservative way of thinking of the North. Call it Communist if you want.

Tet holidays is quite a simple concept: families gather. They eat. They drink. A LOT. Then they go home. 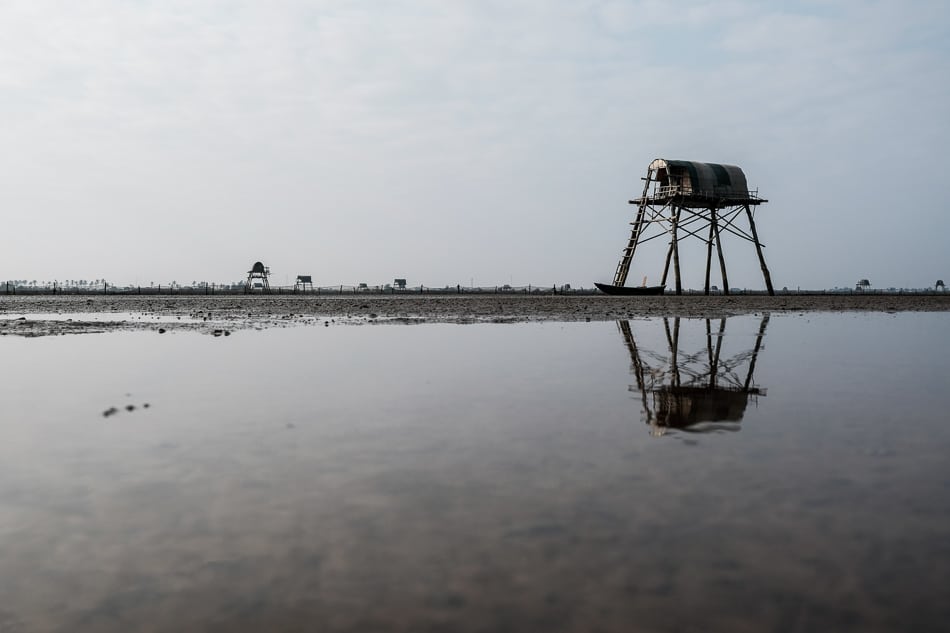 As much as I enjoy Tet holidays with my in-laws, it can feel a little bit boring as this is really deep countryside. There is one coffee shop with an Internet connection. And there is a market. And that’s it. After 4 days of doing not much apart from playing with the kids, and as the sun showed up again, my finger started feeling itchy. I had heard in the past that my wife’s village wasn’t so far from the beach so I took my nephew, who loves photography, and we took off after lunch towards the beach.

As we arrived there I was really amazed by what I saw. Basically, hundreds of little wooden houses built 6 meters above the ground spread on the landscape. Quite phenomenal! 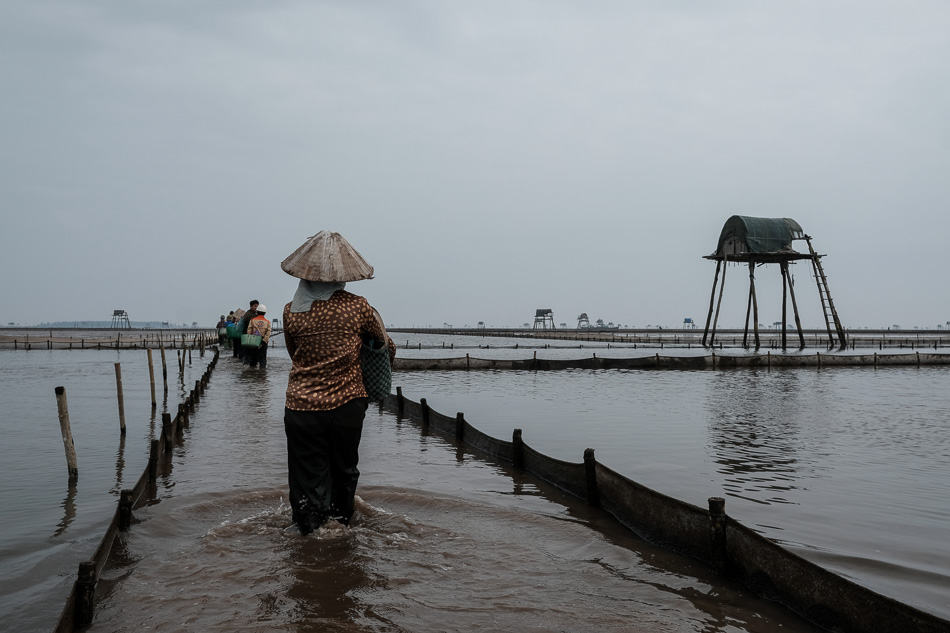 Now it was all about finding people working there. I honestly didn’t expect to find anyone working at it was the Tet holidays, but I had nothing else to do anyway.

Shortly after we arrived we had a coffee in a local restaurant, gazing at the horizon to try to figure out what this place was. After a quick chat with the restaurant owner, he told us that this was an area specialized in growing clams. These wooden houses built above the water serve as security guard resting place. Apparently, the place is quite busy in summer times, and I do hope I will have the opportunity to come back there in summer, and why not adding this location in a photo tour itinerary?

Soon after we saw a group of people heading towards the beach. I wasn’t sure at first if they were tourists or workers, or simply locals going on a digestive walk and taking selfies. So we walked closer to them and suddenly realized they were workers going to work. Jackpot! 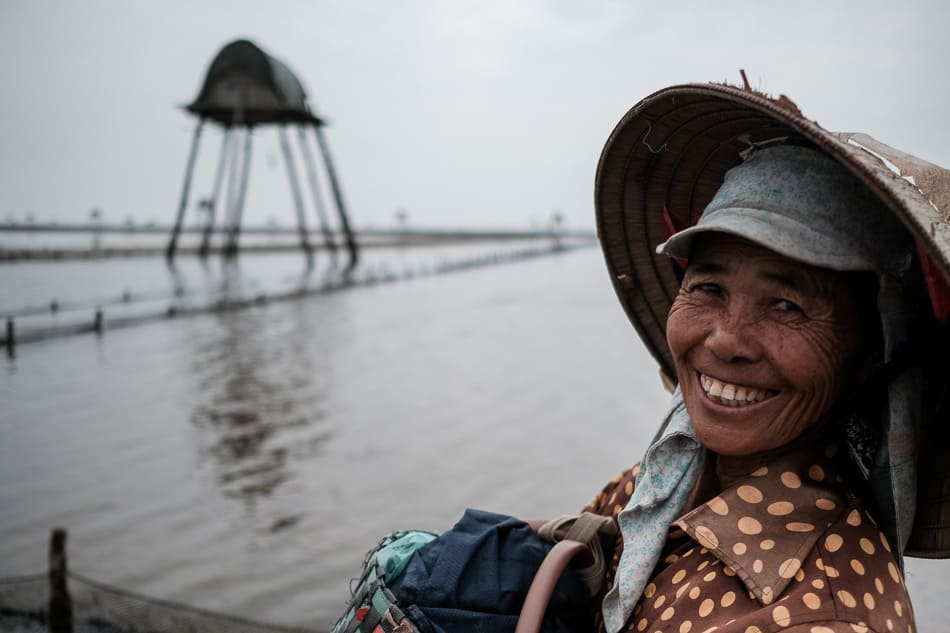 We left our shoes along the road and starting to walk into that “mud-sand” area. I was really hoping that people were only growing clams there since from my experience running photography tours in the lagoons of central Vietnam I knew that oyster shells can be very sharp!

As I was walking very fast in excitement (I always get very excited when discovering some new photo opportunities!) I managed to catch up with the last lady of the group. Of course, you can imagine her face when she turned around and saw a white boy rushing towards her. It usually goes between extreme surprise and confusion, shortly followed by amusement. Anyway, it’s always fun to see!

I started asking her what they were up to, and she told me they were going to harvest one of the “fields”. Double Jackpot!

We kept walking and chatting, and after the usual “where are you from?” and “are you married?” and “how many kids do you have?” she told me that it was their first day back to work after Tet. What a chance!!!

I snapped a few images of her walking while chatting, and kept following the group.

The challenge in these types of situation is to try and anticipate where your subjects are going to walk by, and maybe find a viewpoint or the right background. Ideally, I like to walk in front as I can stand in a spot and wait for them, but catching up with the front of the group meant almost running in knee deep water, increasing the chances of walking on a sharp shell or actually dropping my camera in the water. 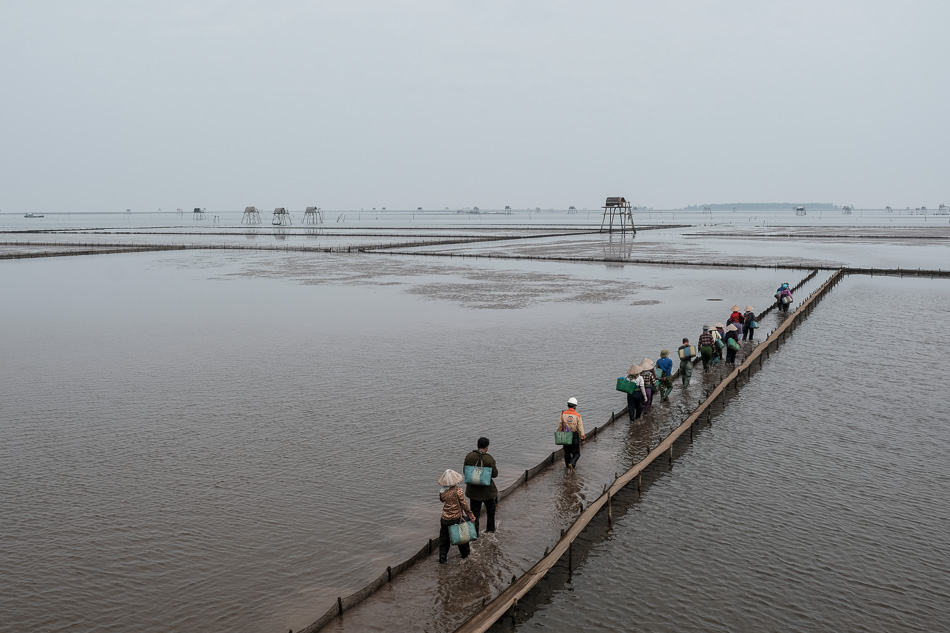 I tried different options including climbing one of these wooden ladders to get in on of the bird’s house.

But I was very much looking forward seeing the people in action, as I had never encountered people harvesting clams apart from the usual river dragging they do in central Vietnam. 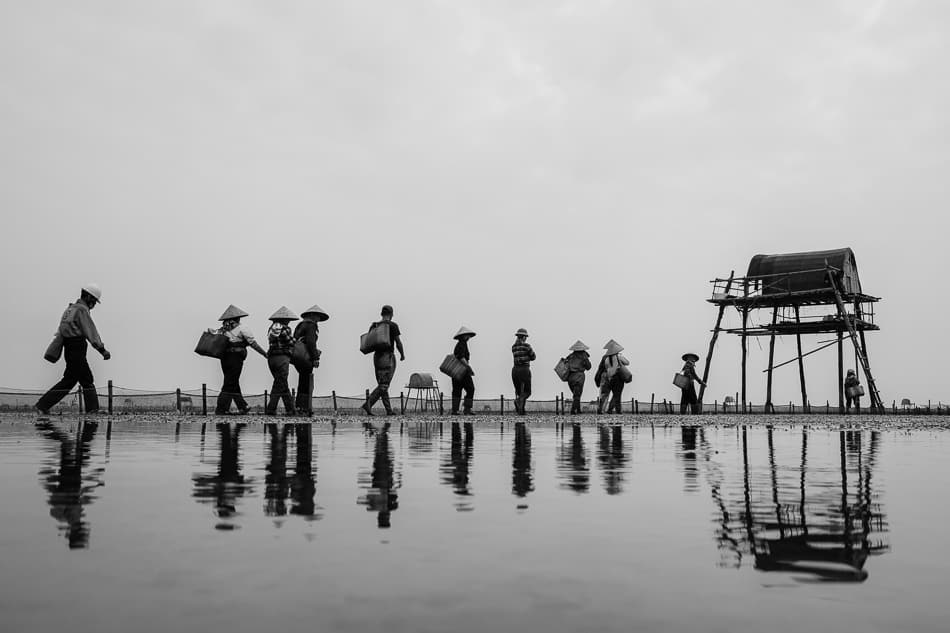 The group started to unload pipes and cables from the fishing boats that were staying on the edge of the field. There were a lot of people running around, pulling pipes and bringing tools, and it took me a good 5 minutes to stop just staring and start thinking about my photos. 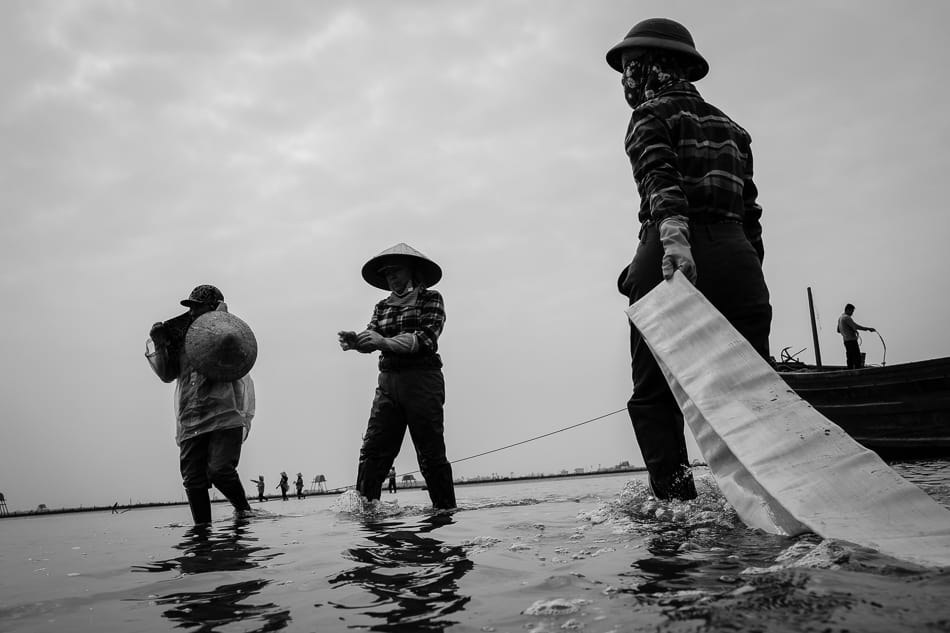 I also went to say hi to the fishermen who were staying in the boats, cooking food and drinking rice wine. I had to refuse a few shots of wine as I knew it could turn ugly if I sat with them! But the point of view from the ground to the boat was very interesting. 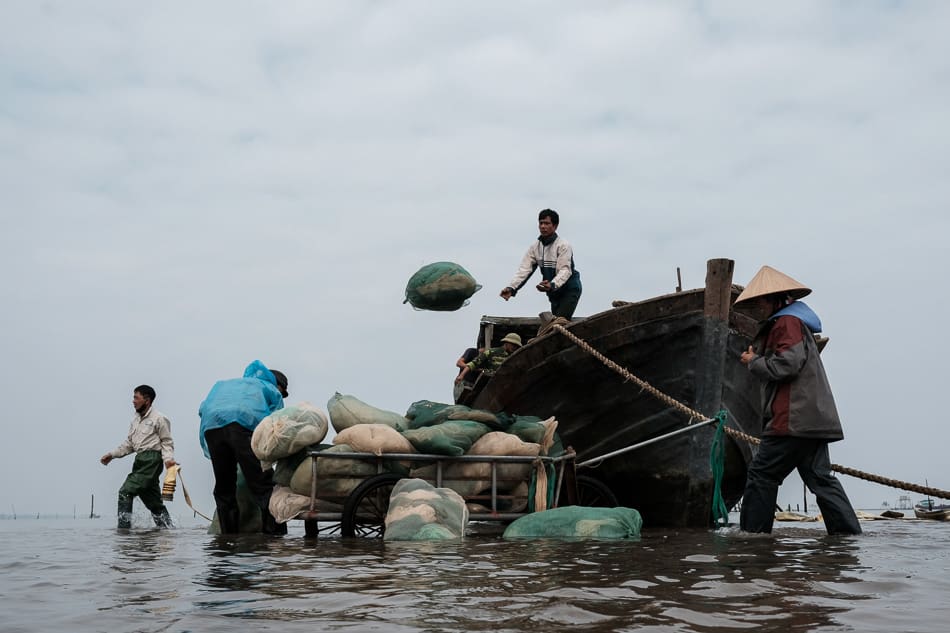 Once the pipes were all set up they started running huge pumps, and the water flowed through the hoses. Just watching them you could tell there a very strong pressure in these pipes, as some women had to lean forward in order not to fall back!

I tried to compose with several women and the water spraying trying not to juxtapose them. As the sun was half hidden behind the clouds I could get a perfect exposure but I easily managed to recover shadows on Lightroom. 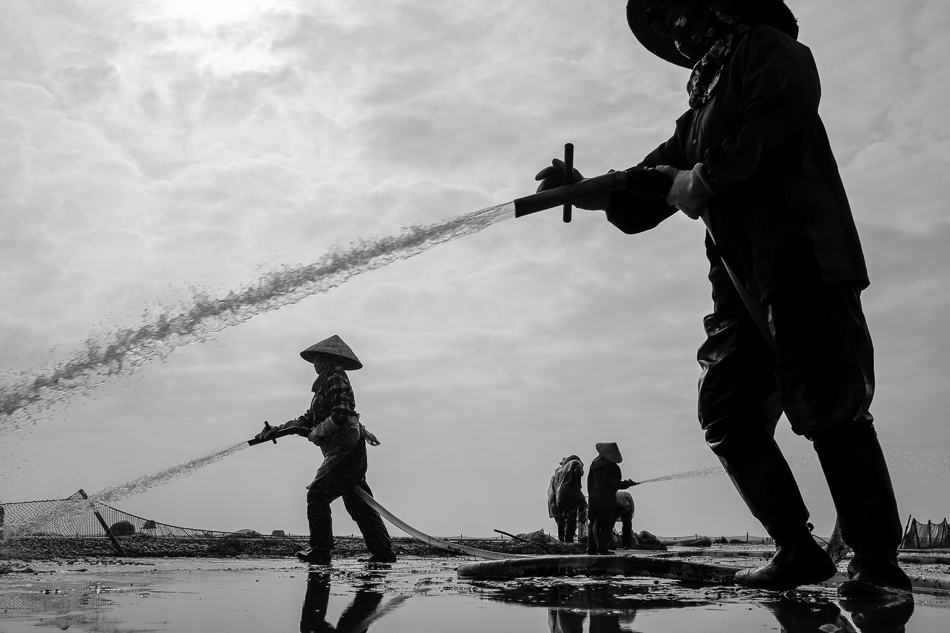 Then things became really interesting. The women actually hose down the ground to remove the first layer of sand, and suddenly you see appearing a carpet of clams. Every square centimeter of the ground is covered with clams! 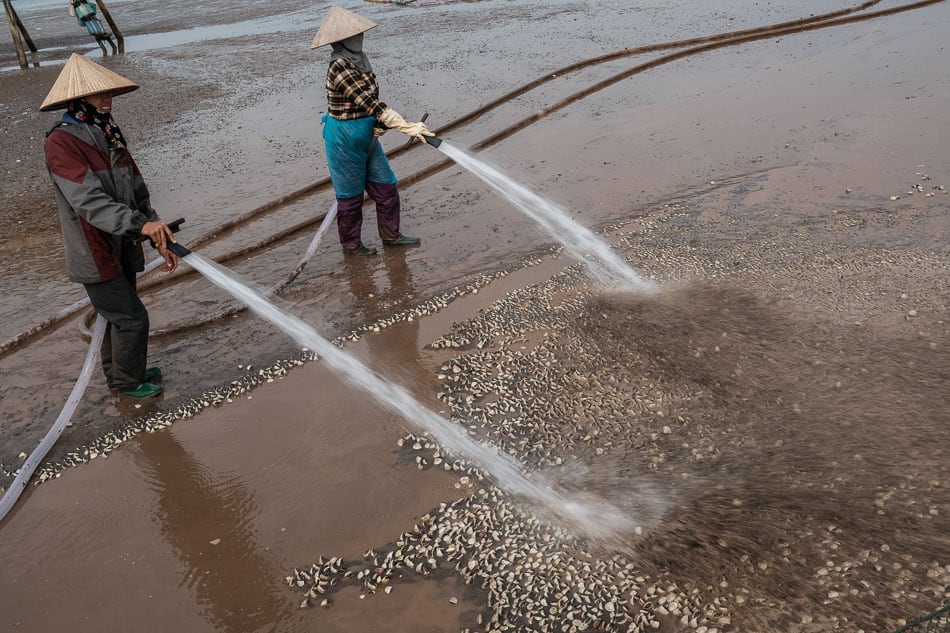 After pushing the clams away into nets that they set up on the edge of the field, a group of men pushing a cart come and carry the bags filled with clams into the fishing boats.

From then, people on the boat will sort the clams by size. Apparently, the big ones are being exported to China while the smaller ones stay in Vietnam. 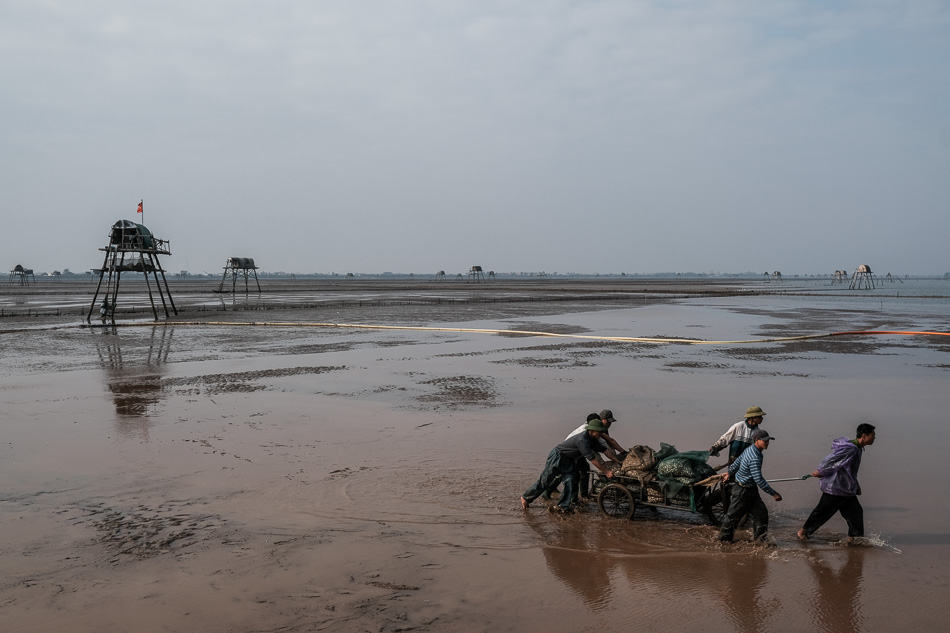 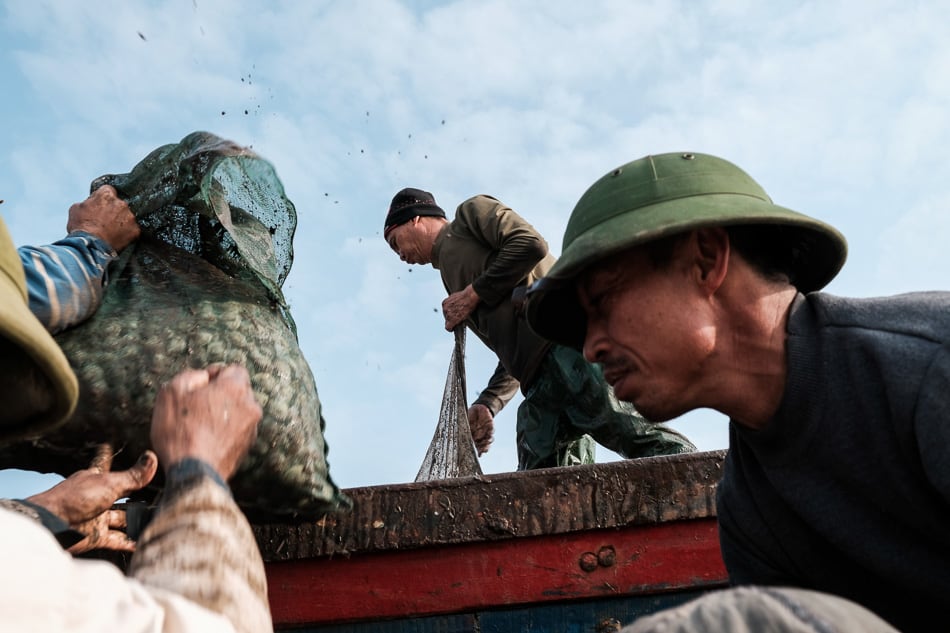 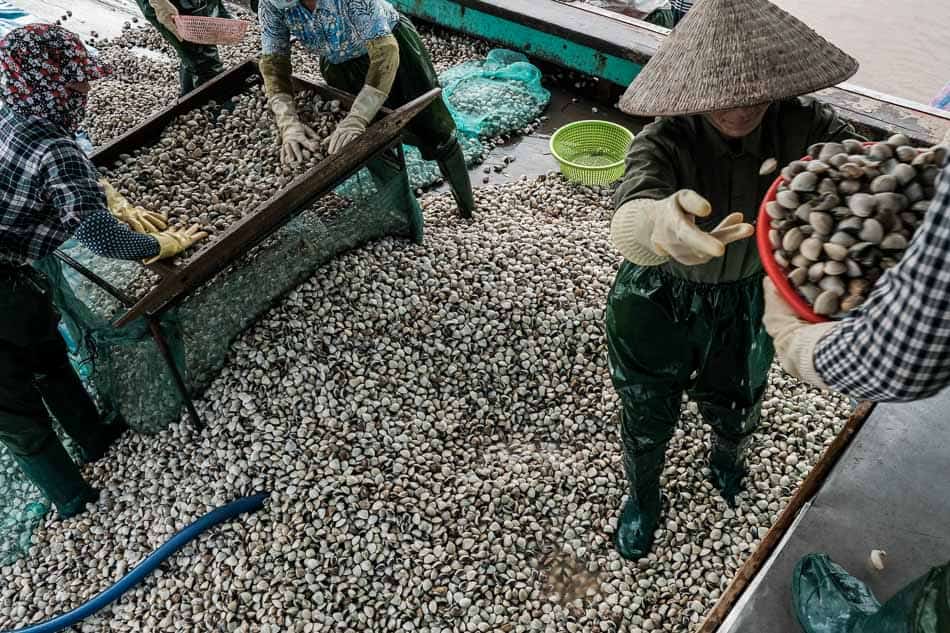 After about an hour walking around taking photos, we decided to take a break and went up the wooden ladder into one of the bird’s house. There, one man started cooking clams just for us, offered us rice wine and cigarettes, that we politely declined. Of course, the Bong was there too!

The man explained to us that the field belonged to his brother, and he was in charge of doing the security there. While people were working he was keeping an eye on them, sometimes screaming a few orders from his tower.

As the sun started to set we had to head back to our village, to enjoy another huge dinner, we asked if we could buy some clams to bring home. One man on the boat gave us a 5kg bag filled with clams and told us to go away. He didn’t want any money and was very satisfied to see us having a good time with them. He told us we could drop a little something to the man who previously cooked clams for us, which we did on our way out. 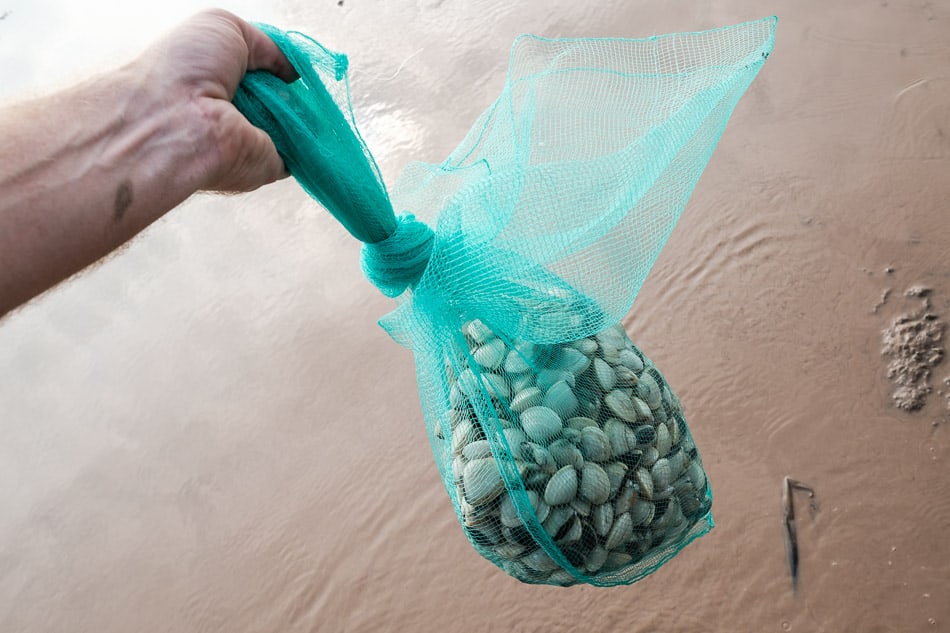 The beauty of traveling and the friendliness of people make it worthwhile. Add to that the photography… There is nothing else I want to do in my life!