It is funny how sometimes your prejudices can be washed away in minutes. Or maybe it is sad.

2 weeks ago, I was leading a 3 day photography workshop through central Vietnam. We started in Hoi An, and ended up around Lang Co and Tam Giang lagoon, which are really stunning places to photograph. With me and the co leading photographer, were 7 participants. Few of them were travelers who happened to find the information about my workshop while in Hoi An, and the others were regional expats and Singaporeans.

After a day and a half around Hoi An, focusing on busy markets and people, we headed by mini van into Lang Co bay, South of Hue. There, the plan was to find a good location, set up our tripods and do landscape photography. Of course, as this is Asia, I knew there would also be some good portrait opportunities. We arrived in Lang Co quite early, around 2pm. I always like to go there early as it is often cloudy, and the light can be incredible in the middle of the day. We first stopped the car along the lagoon, as we spotted a few women working in the water. Their main job is to dig their hands into the mud, in search of snails or clams. They can spend a whole afternoon in their, gathering from 1 to 6 kg of it, that they will be selling for about $2,5 a kilo. 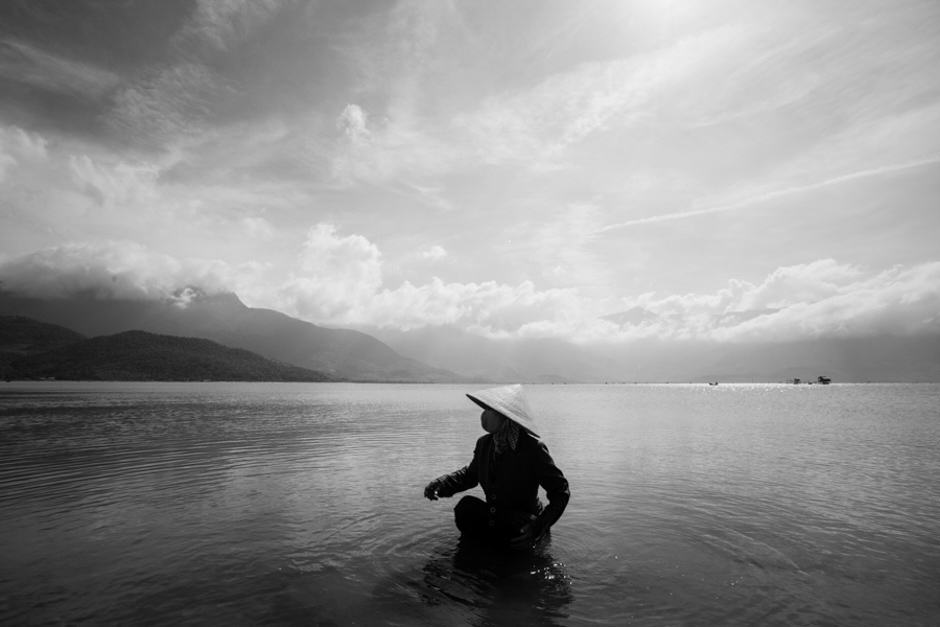 People there do work very hard, and are open to tell a bit of their stories for people who are keen to get their feet dirty.

But as the light was very strong, no clouds were coming to help us, we decided to keep driving along the lagoon. A little bit further, we spotted a man working on a basket boat. The light was still strong, but the scenery looked very good, and we decided to stop again. This is where we met Huy. 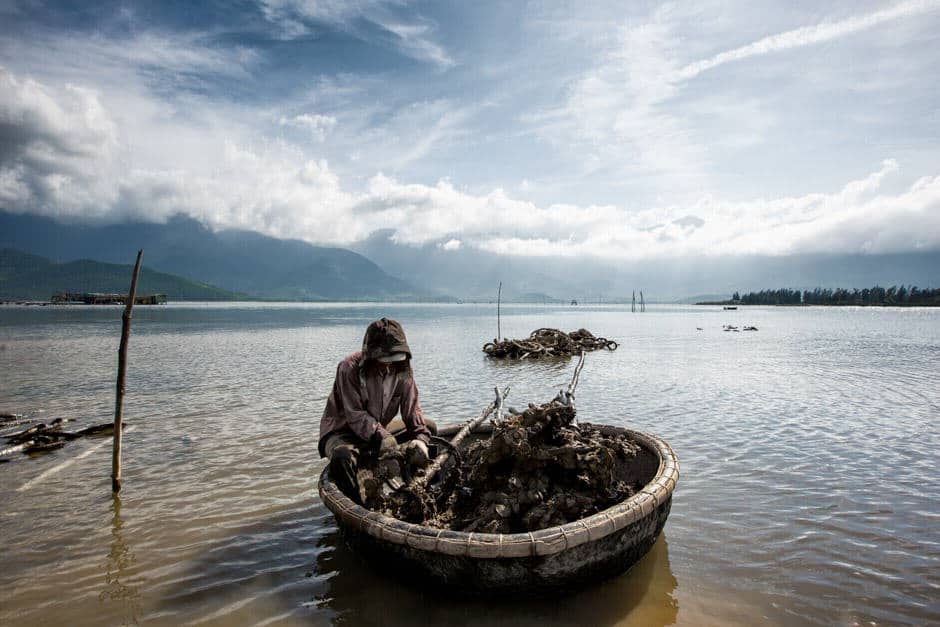 First, 3 of us walked in the mud to come closer. We did not know what the man was doing, but everything about him looked interesting: his face, his posture, his body gesture, etc… To be honest with you, and as it happens very often when doing Travel photography, I first considered him being a very good subject. At this point, there is no consideration of the man’s story, background, or kindness. He is just a good subject.

We came closer to him and I started the usual conversation: “Hello, what are you working on here? How old are you? What’s your name?”. This is a very good way to break the ice, mostly when they realize this “white face” can speak their language. Huy was taking oysters from the lagoon, where they grow them on bicycle tires which are aligned on wooden sticks. He was very friendly, but a little shy in front of our cameras. But he had the smile, the contagious kind of smile. However hard working are the Vietnamese people, there is something about them which amazes me. They are happy. Always. 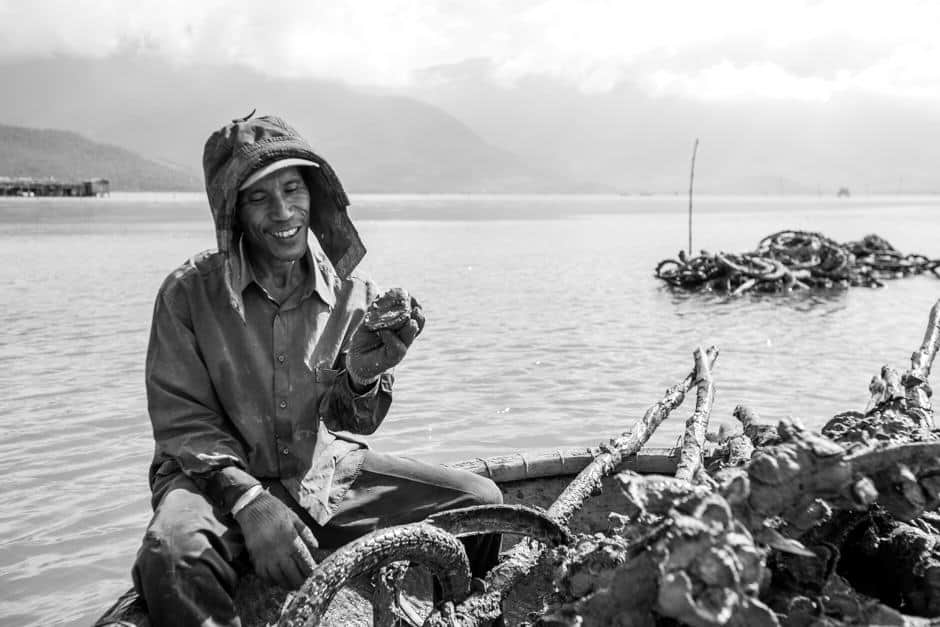 We took a few photos but as the light was still strong, we left him to his work.

Back on the road, we felt hot and thirsty and I looked around for a place to have a drink. There was nothing around, but 2 woman sitting under an umbrella, with a few oysters in a bucket they were trying to sell to the locals driving by. I asked them if there was a place around we could have a drink, and there the Asian magic happened: one of them stood up and invited us into her garden, which was right by the road. There was nothing there, even though the place looked lovely. 2 minutes later we have plastic tables and chairs, and a perfect garden coffee shop just for us.

I must say Vietnamese people are very resourceful and welcoming. A real pleasure to travel around.

What I did not see at the time, is an older man who came to meet the rest of the group near the van. He came to see them holding a note in his hands. Everyone assumed that he came to ask for money, as this often happens when traveling. People ignored him and followed me into the “coffee garden”.

How wrong we were.

Soon after, the old man who met the rest of the group with a note in his hands came to sit next to us. He was talking to the woman who invited us and called her “Daughter”. He was obviously the owner of the house we were in.

We already felt a little shy that we ignored him earlier, so I started chit chatting with him and the other people around. When I told him I was French, his face brightened, and he said “Bonjour!”. This old, weak looking man, with a bank note in his hands, was not who we thought he was. 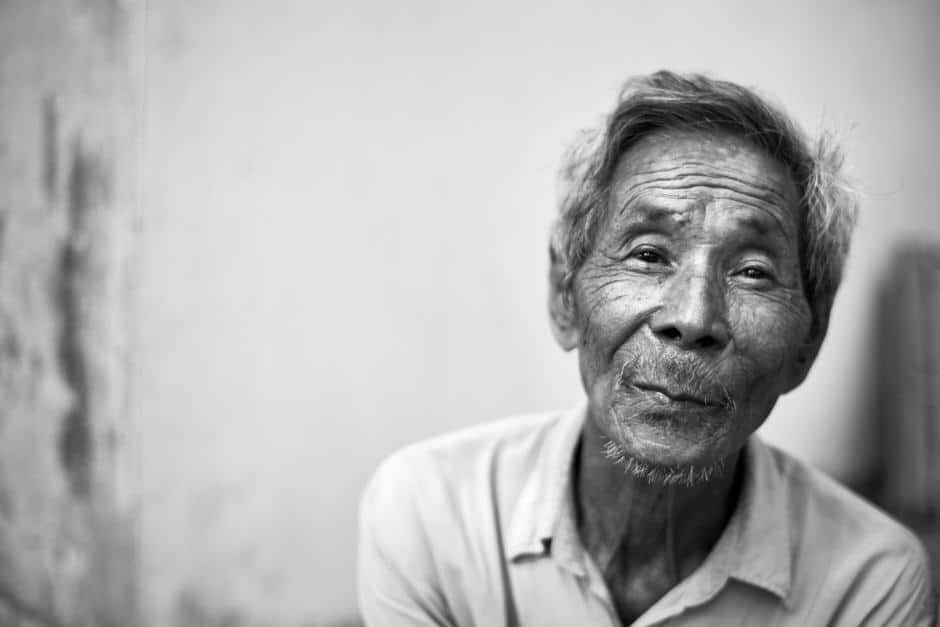 Hoang is 88 years old. He was born in Quang Tri, up North, but has been living South of the DMZ line since 1954. When Hoang was 19 years old, he joined the French foreign legion, and was fighting the Viet Minh (North Vietnam troupes) in the mountains around Lang Co, up to the Lao border, along with the French army.

In 1954, when Vietnam was split in half, Hoang decided to remain in the South, here in Lang Co. From that time, Hoang has been a fisherman in the lagoon, growing oysters, clams, shrimps and fish.

The weak old Vietnamese man we met before was gone, and a proud, strong man was talking to me. (lucky for me, one of the workshop participant came along with his Vietnamese partner, who helped translating. My Vietnamese skills can be limited!).

A younger man, who had been following the conversation, joined us and talked about how life is now difficult around the lagoon. He was Hoang’s younger son. He said that they cannot fish as much as before, and struggle to make ends meet. He then brought me into the backyard and showed me a pile of wooden sticks, the same I saw earlier being used by Huy, and told me: ” we cannot use them anymore”. Around that pile of stick, near some bamboos, was playing a little girl, Hoang’s grand daughter. She had the innocence of a kid, and it struck me as I was still in shock, hearing their stories. What future will there be for her? 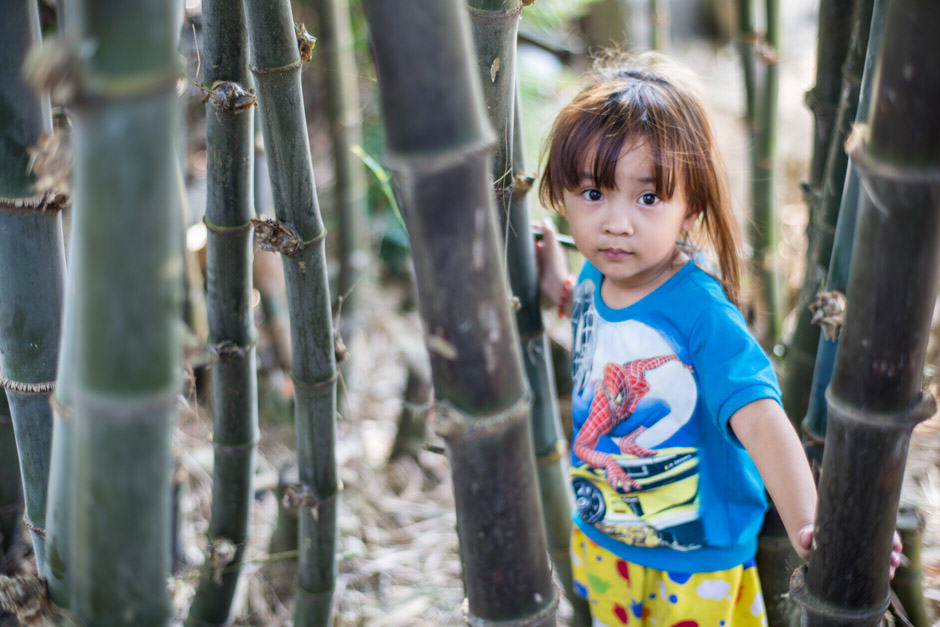 There was a time, said Hoang, when things were going well. The lagoon was filled with sea food, and everyone could grown and harvest enough to make a living. But since the recent years, the local government is forcing the local fisherman to remove most of their small farms. They even come to their house and confiscate their material.

They said, “we have to keep the lagoon beautiful for the tourists”.

Because of us, the noisy tourists who parked their van behind people’s houses without saying hello, they will run out of job. The local government thinks that tourists want a clean lagoon, and I do not know why. Everyone I have talked to actually come to Lang Co for its seafood, and the beauty of its wooden sticks coming out of the water. The little wooden shacks built on the water to keep their equipment, and the long boats that slowly cross the lagoon early morning.

I was upset to hear that, and after our conversation, I took a walk outside the house to look at the lagoon. I could not imagine seeing it empty of its activity. And here, I saw Huy. He was standing under the umbrella where the 2 women were selling oysters before. There was an incredible light on his face, bouncing on the water and through the umbrella. I came to see him, and asked him if he knew Hoang.

He was Hoang’s older son. He was trying hard to get some oysters, the few they were still allowed to grow. He told me that with sadness, but he could not hide his smile, a way for the Vietnamese people to keep the face in all situation. The smile was there, but the eyes were tired, from a hard working day, a hard working life. 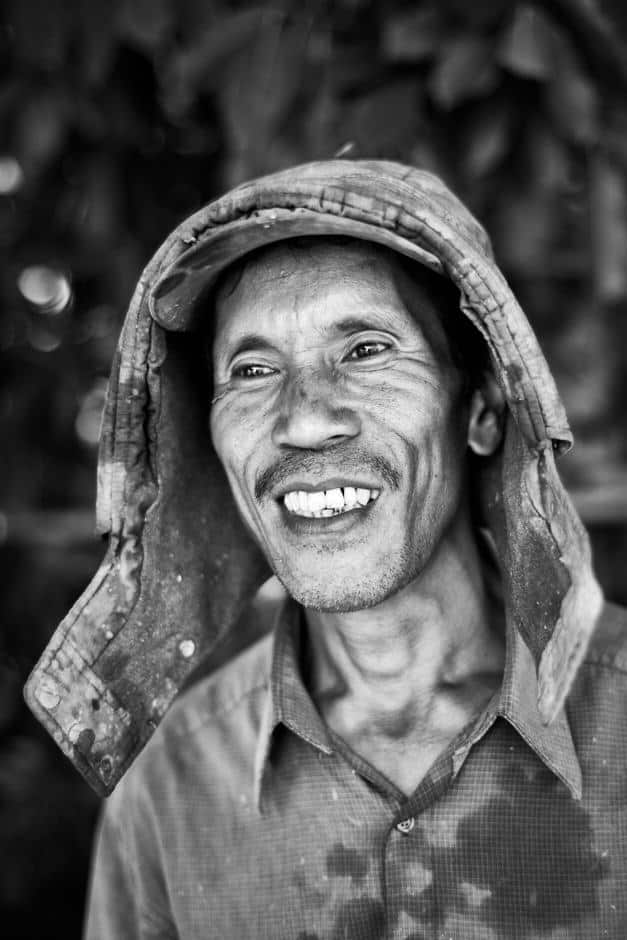 We finished our coffees, and thanked our guests. We understood, only when leaving, that Hoang was given some Russian money by some tourists passing by, and wanted to exchange it against some Vietnamese Dongs. Michael, a German participant in the workshop, was very touched by Hoang’s story, and exchanged the money. Trying, somehow, to make our guilt go away.

I will be back there every month, and make sure to always visit them.