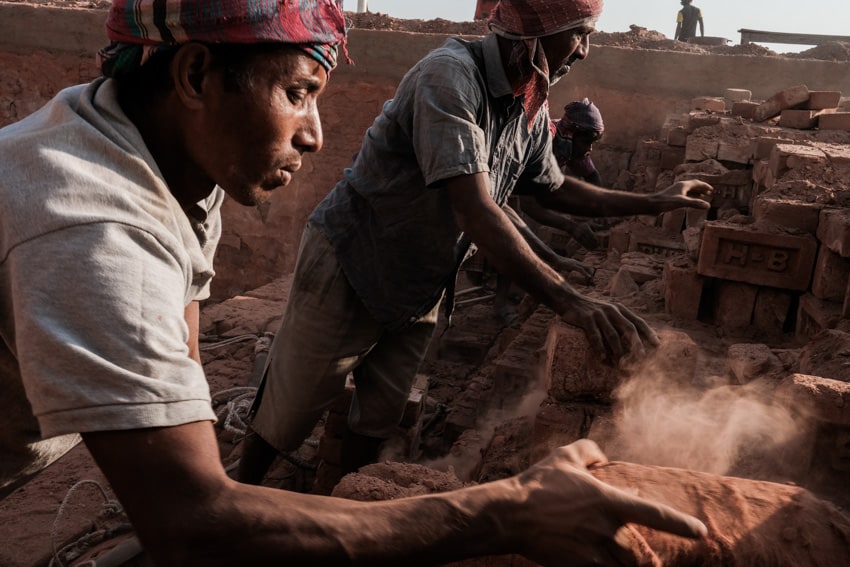 Last November, while exploring the countryside around Dinajpur, North Bangladesh, something unexpected happened. Well, it is Bangladesh after all, and unexpected things somehow become expected as they happen so often. Mostly in terms of photography, Bangladesh is the country where I photograph the most, where I find the most interesting subjects in a short period of time.

We do spend a couple of days around Dinajpur as it is located in the North of Bangladesh and can be very misty early morning. We have been going there for the last couple of years and it really is stunning after 6 am. The mist is rolling through the rice fields and the small paths heading to different villages, while people are starting their day slowly. It definitely is a big change from the hustle of Dhaka.

After capturing a few people in the misty fields, and of course after our morning tea, we spotted a few chimnies and decided to check it out. Brick factories are a place that I particularly love due to the fact that is it always very busy with people. It is one of my favourite places to teach the layering of people and shooting very busy human activity.

As we arrived into the factory, and after saying hi to people who seemed to have no idea from which planet we were, we noticed a small group of people throwing bricks in a truck. The best thing about this scene was the two massive chimnies in the background. Brick factory chimnies are always very dramatic and to me, they bring an atmosphere from the industrial revolution. 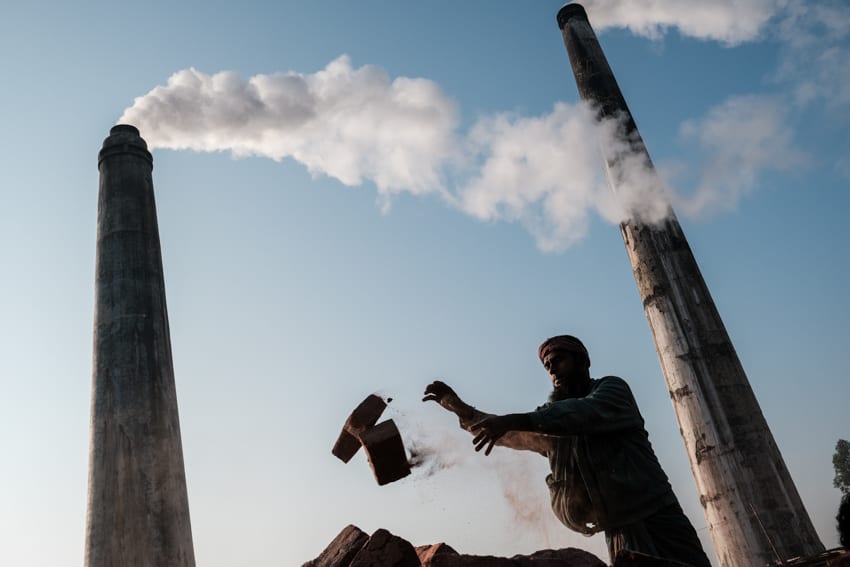 A simple yet satisfying start. A simple frame and a dynamic moment. I wish I had a wider angle lens though.

Soon after we saw a group of about 6 men heading into the brick kiln. What they do is they unload the bricks by loading them onto wooden planks, bringing them outside the kiln. My first reflex was to try and separate all the men from each other. One of the best ways to shoot a busy situation, once again, is separation. The first attempt ended like this. 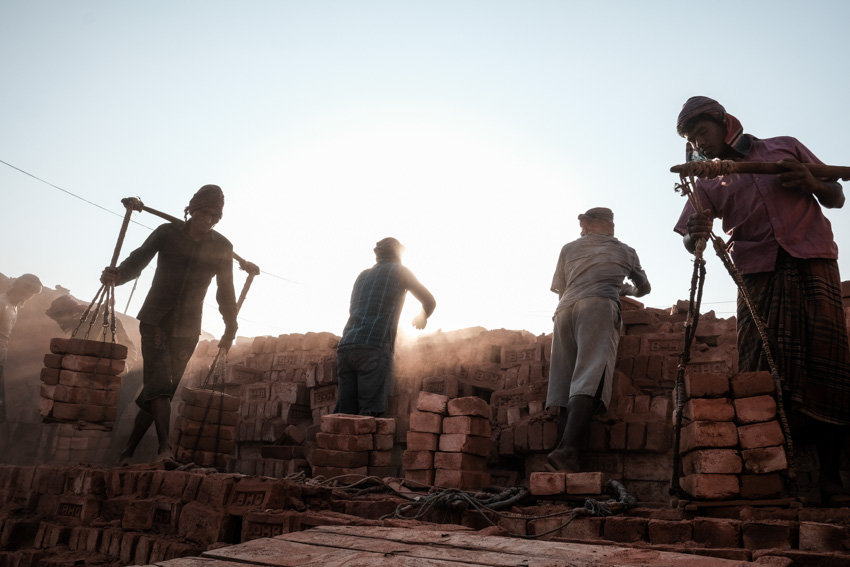 The light was still soft so I could afford to shoot into the light yet keep details on my subjects. It was all right but my eyes really got caught by the dust created by the bricks shuffling. Smoke and mist and dust help create very interesting atmospheres in your images, as well as giving it a raw feel. I went inside a little closer to get a tighter composition, which I think is nicer. But of course, there is always someone staring at the camera in Bangladesh, and it really doesn’t work for me. So I move in from another angle. 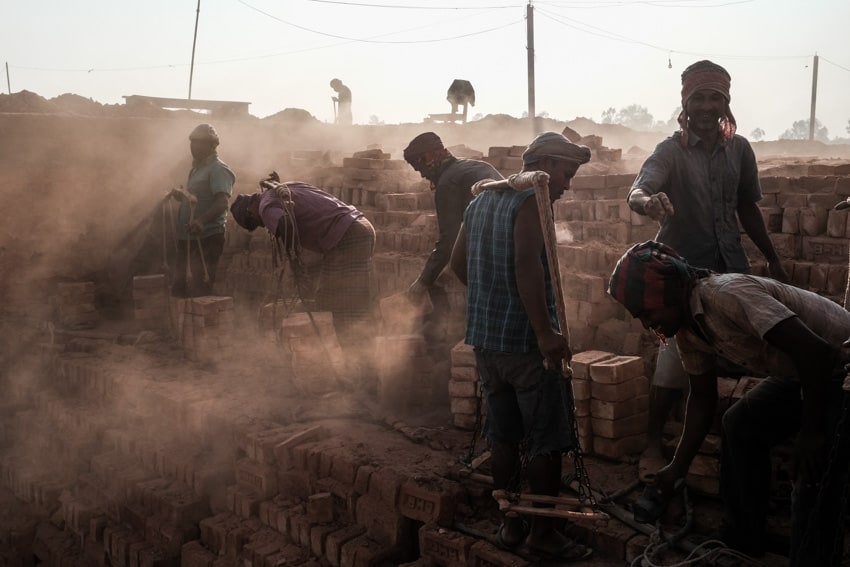 From this point of view I realized that first, I can manage to get more of that morning light caught in the dust. Second, I could now layer as well the people who were working on the kiln in the background. More layers being more fun, I ran for it. the workers were moving back and forth, bringing the bricks outside of the kiln. Some were going up, some were staying down. Meaning I always had to adapt and try and compose with a situation that changed every minute. Believe me, one of the best opportunity you can dream of in order to improve your people photography skills. 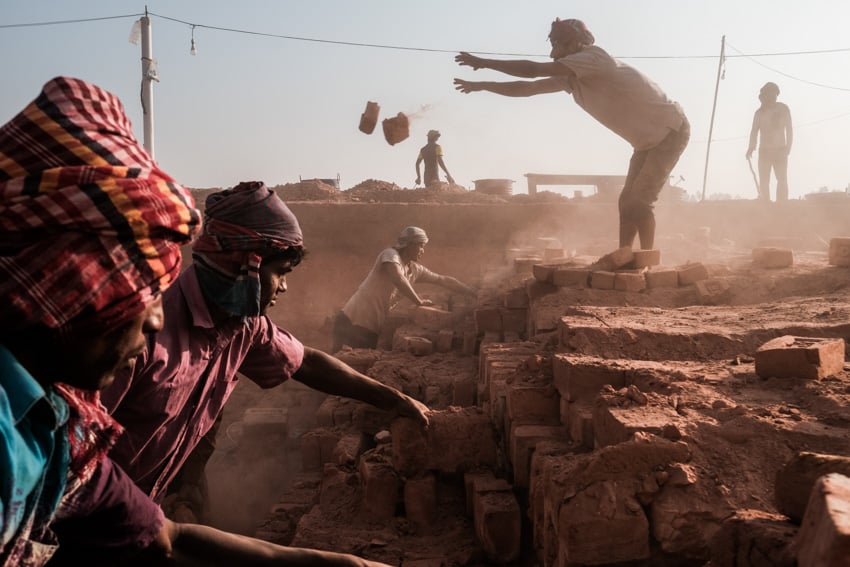 When I saw that moment happening, the man throwing the bricks, I took the image. You know, because of that decisive moment. But what really caught my eye was how beautiful the light was on the arms of the men in my foreground. Also, as I didn’t want to just layer people but I was trying to tell a story, I felt that I needed to a stronger element in my foreground, some details of hands grabbing the bricks. And hopefully, some dust as well. I thought that at this stage I also needed a faster shutter speed to freeze al that action. 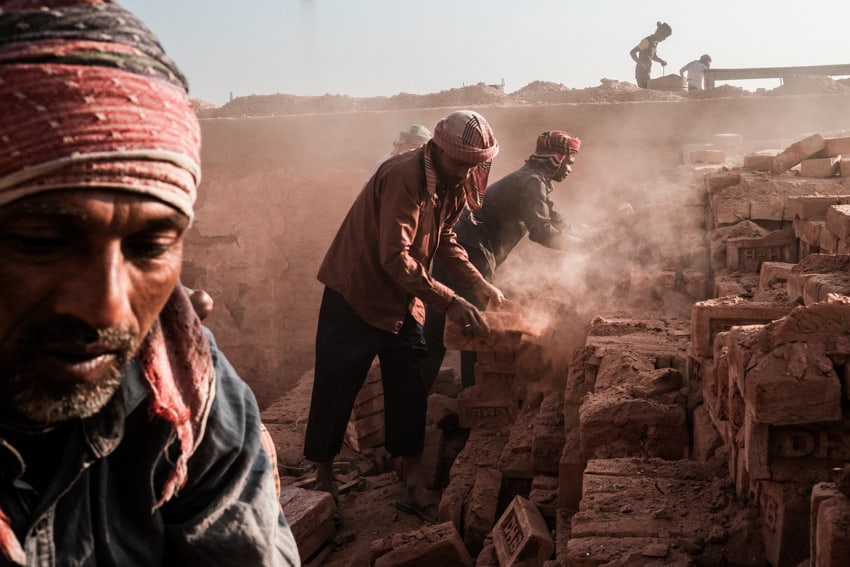 That first shot was a miss, as the man in my foreground decided to pick the bricks that were really close to me. Shooting with a 23mm (equivalent to a 35mm) I was just too close. Once again, I regretted not having a wider lens. So I stayed in my position, pressing my back against the wall, trying to be as far from my foreground as possible, so I could get some hand details. Also, in this contact sheet, I’d like to introduce the concept of “Static frame”. This is a technique I often use when photographing busy situations. The idea is to use a static elelemt, either in your background or foreground, and centre the busy activity around it. If only two or three more interesting elements come into place, your frame will be organized around that static element. It helps to organize your thought process when things around are really crazy. 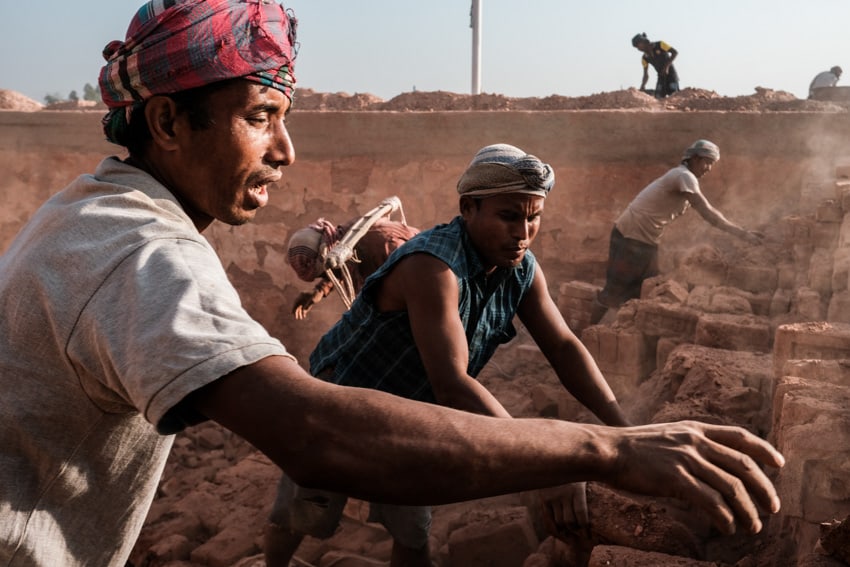 Now the hand was there, but the juxtaposition of the people in the background was so-so. Also, the hand wasn’t carrying any bricks, my timing wasn’t right. I had to start shooting more frames to capture the perfect moment. I waited for the men to come back, and I tried again. 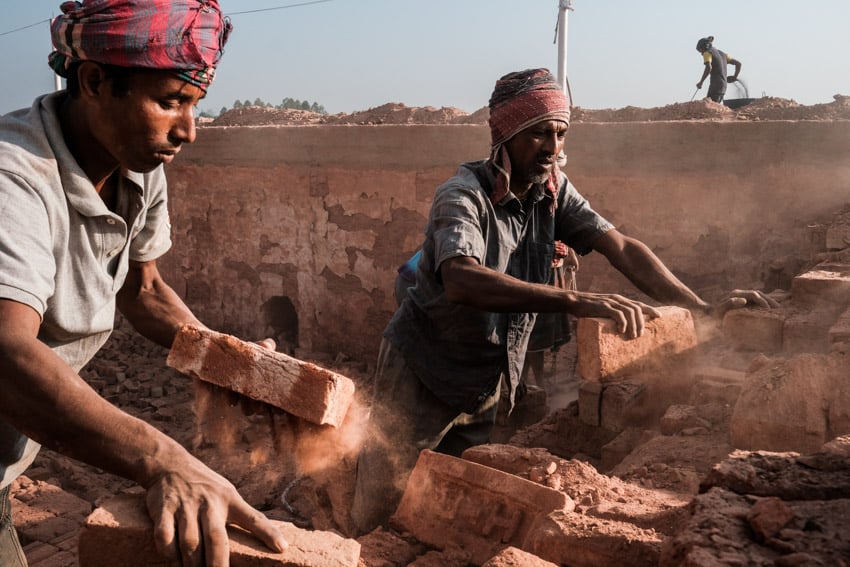 That last image is the strongest one in my opinion, as the tilting of the lens (that I did in order to fit the hand in the corner) adds more dynamism to the action. Even though the image above is a little cleaner, the more messy one gives the feeling I had when taking these images: messy, busy, dusty. If only I had a wider angle…