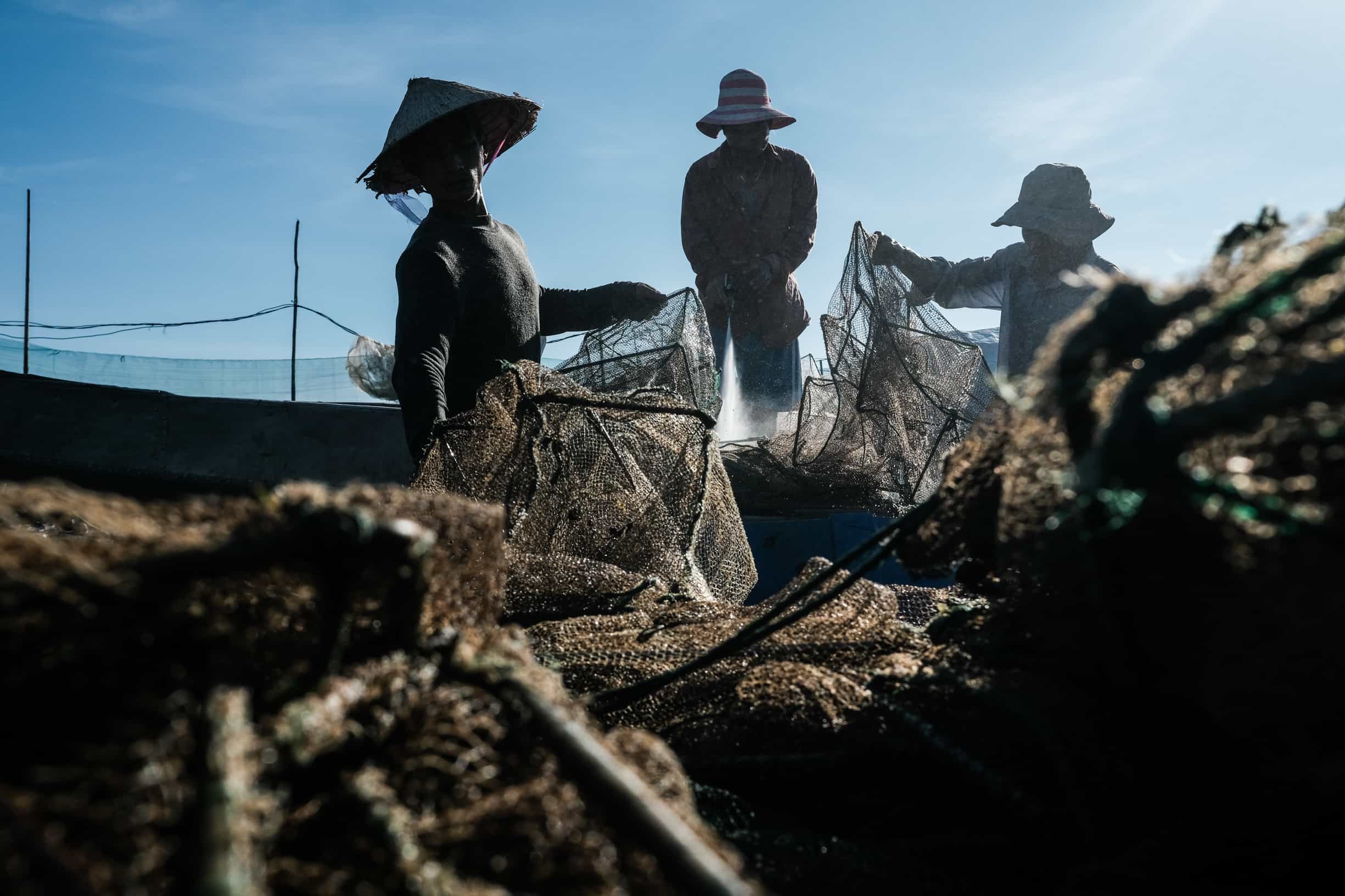 I’ve got a new contact sheet for you guys today! This one showcases a scene from last month, during our 3-day Central Vietnam photography tour.

After an amazing sunrise over the lagoon surrounding Hue, we kept walking along the water, capturing photos of the fishermen at work. Then, our appetites sated by breakfast and coffee, we met this group of men, who were busy cleaning their fishing nets.

The morning light was still quite soft – so we decided to venture into the muddy water and find the best angle to capture the scene.

Because I knew this would make an interesting contact sheet and because I knew we could take the time to cover many different angles, I captured a wide shot of the scene to show you how it looked like from the road, when we first spotted the men at work. 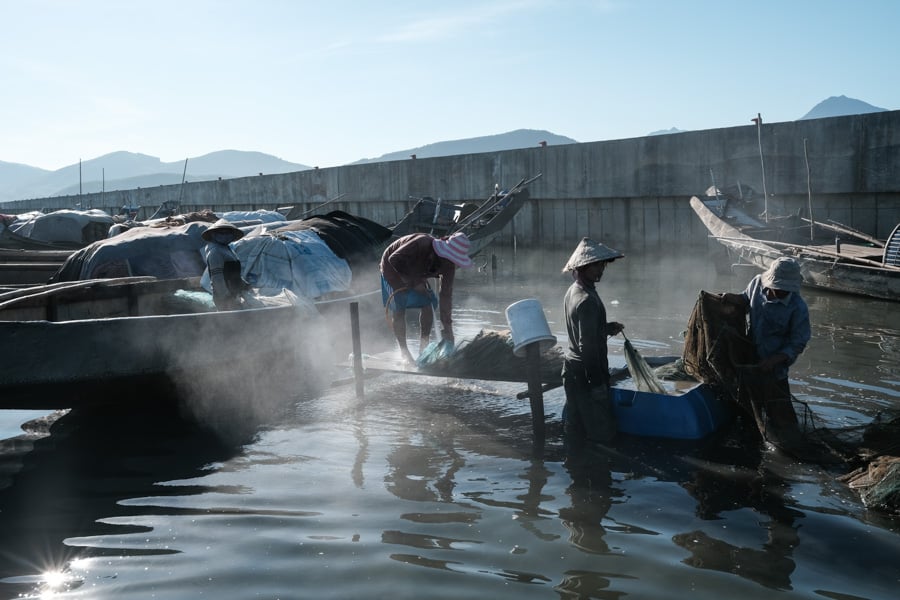 As you can see, there were several interesting things about this scene:

But how could we capture this scene at its best?

Our vantage point at the time had us facing a less-than-attractive concrete wall. Which was doing nothing whatsoever for our background.

So the first thing we did was to try and remove this wall from the shot. As we were walking in the muddy water – which didn’t allow us to move quickly! – we started with the same angle. And the best way to remove the background, while keeping that angle upon approach, was to get low. 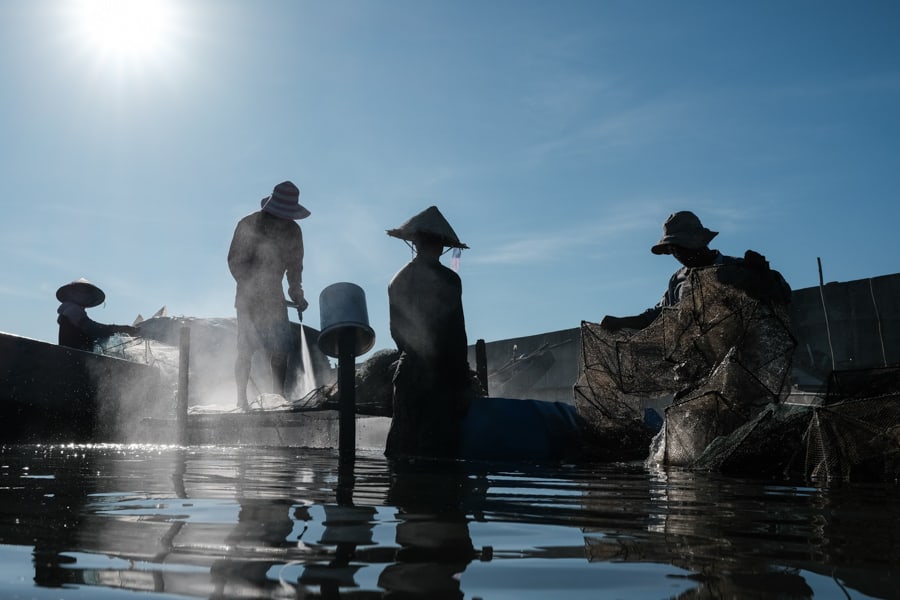 Thanks to this low angle, we managed to remove most of the wall.

Now we faced another problem.

The problem being that all of our subjects were now silhouettes. True, it looked pretty cool – but I felt we were losing details of the action, of what they were doing. (Plus, I am trying to shoot fewer silhouettes in general!)

The upside of this angle was that we were low enough to capture water droplets as they splashed against the wood, flew into the air and caught the light.

Next, we moved to our right.

We wanted to see how changing the angle of light would affect our image.

If you look back at the first image, to the far right side, you can see a stack of fishing nets in the water. These were the dirty nets that the men were cleaning.

Basically, by moving to our right side, we would be very close to these nets. And that was a real plus for us: not only could we add the nets in our foreground to tell a more interesting story, we could also use these nets to hide some of the background elements that we didn’t want. Win-win. 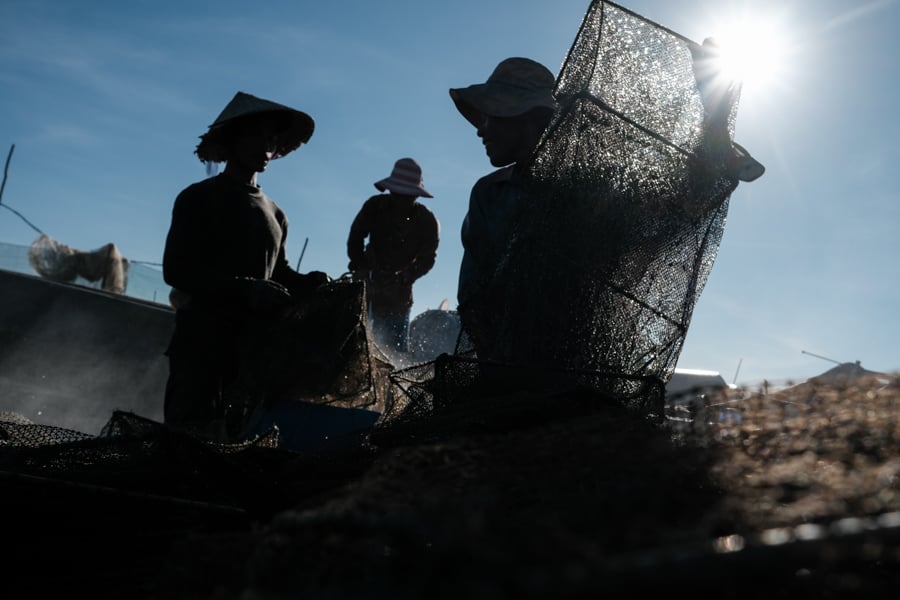 At that moment, I could already feel the image becoming much more dynamic, having filled the frame with all the interesting elements of the scene. Plus, being closer meant that the rhythm was also becoming more interesting, letting my eyes travel up and down.

Unfortunately, the nets were too dark.

So I decided to change my angle just a little bit, by finding the nets which were lit by the sun. I moved closer to one side and in doing so, realized that these nets could create leading lines.

Now, using a low angle once again, I could remove any unwanted elements of the background. I could also use the fishing nets as leading lines in the foreground.

On top of that, I managed to separate all of my subjects, placing them alongside each other in a more “organized” way.

I felt like that was one of the most dynamic compositions from that scene. Still, a few elements were missing.

Firstly, we couldn’t see the water splashing in the air – which in my opinion, was one of the most interesting elements of the scene.

Secondly, the 3 men were very close to each other, and I felt I needed to give a bit more separation between them. So I moved a little further to my right side, waiting for the man on the right to take a step back and separate himself from the other man in the background. 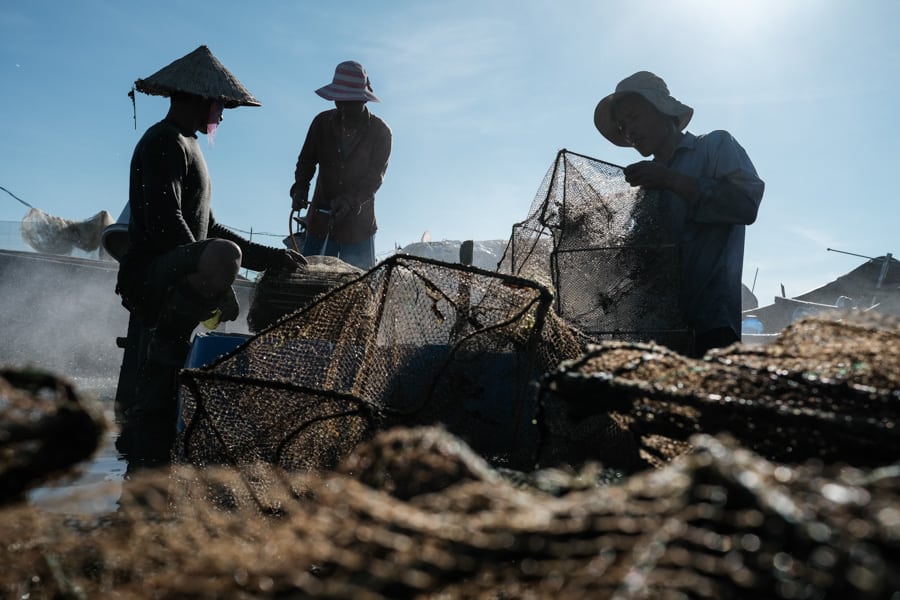 Now, that’s what I call a clean shot!

Next, it was time to explore another angle of light and move beyond the fishing nets to our right. The idea here was to try and see from which angle would the light best catch the droplets of water flying in the air.

By the time we moved to our right, the men had stopped working. Apparently, the hose had an issue and needed some fixing. It was a perfect opportunity to get closer to the men and to have a chat. (Since they were so busy pulling and cleaning their fishing nets, we had only said hello as we arrived.)

Top tip: Talking to your subjects, interacting with them and showing interest is the best way to create a respectful relationship with the people you photograph.

We asked how long it takes them to clean the nets (about 2 hours) and whether they do it every day (no, they don’t). While we were talking, and because we were closer, I took a quick shot of the man wearing the hat… because the light on his face was very interesting. The morning sun was bouncing on the water and lighting him from below, allowing us to clearly see his face under the conical hat. 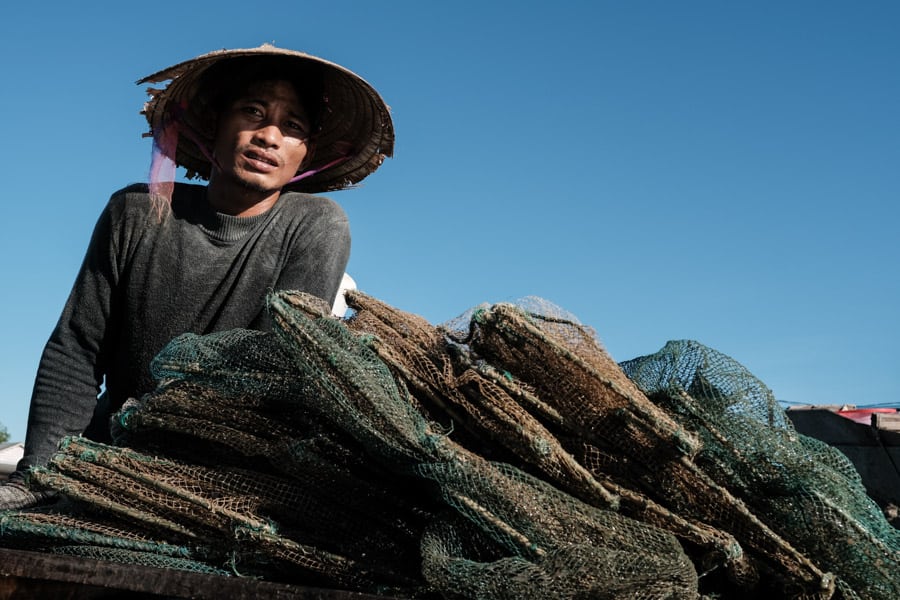 A nice picture – but a very shallow one.

After all, it is just a man looking at the camera. There is no story (apart from the fishing nets below him), there is no action. Unless I got very, very close to him with a portrait lens, I wasn’t going to get a great image.

After a few minutes – and after one of them fixed the hose – they went back to work. We were closer to them at that stage, so it was time for a new angle.

Because of all the messy boats behind them, we went low once again, close to the water. This allowed us to clean up our background – by having mostly blue sky.

This angle was very interesting, as the sidelight came to hit our lenses and created a nice flare. The men were all separated, and we could clearly see the action.

But I felt like it was a little “too” organized. Something messy was missing, something that would make the viewer feel like they are in the scene.

After talking to each other and analyzing our images for a while, we decided to move back to our original angle – from the left – as this was the angle where the light was catching the droplets of water best. We wanted to see the water splashing all around, to add a more dynamic factor to our image.

So, after having my lens covered in droplets a few times (!!) and cleaning it after each incident, this is what I ended up with. 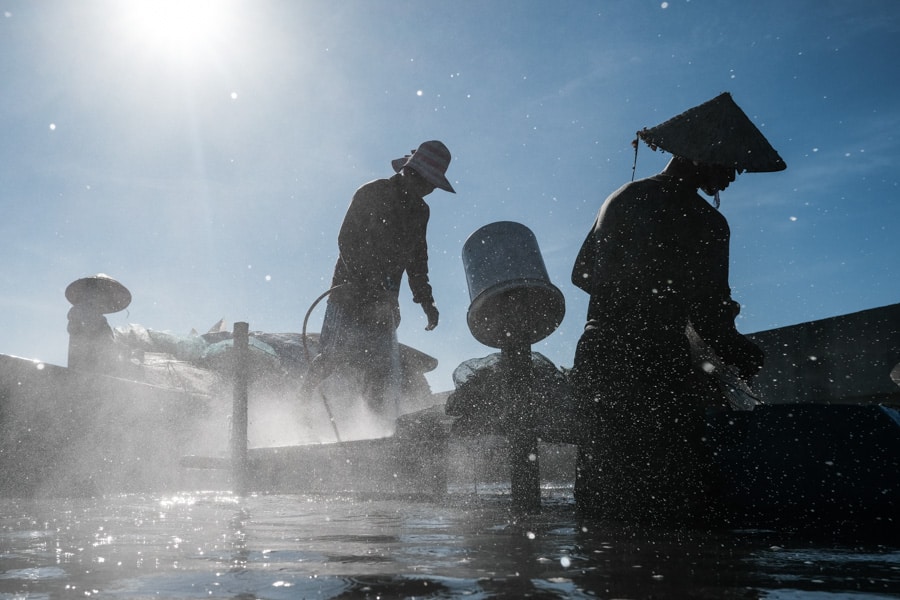 The splashing water did indeed create a great result, and the 3 characters were placed in such a way that they created a soft curve, going from the top right corner to the bottom left.

I personally prefer the 4th photo in this series, with the fishing nets in the foreground and the men close to each other.

It feels a little messier, and it reminds me of how the scene was. Having a composition that is very “clean” doesn’t create the same effect here.

Sometimes, it’s all about the little imperfections.