Directing your subject: a practical example 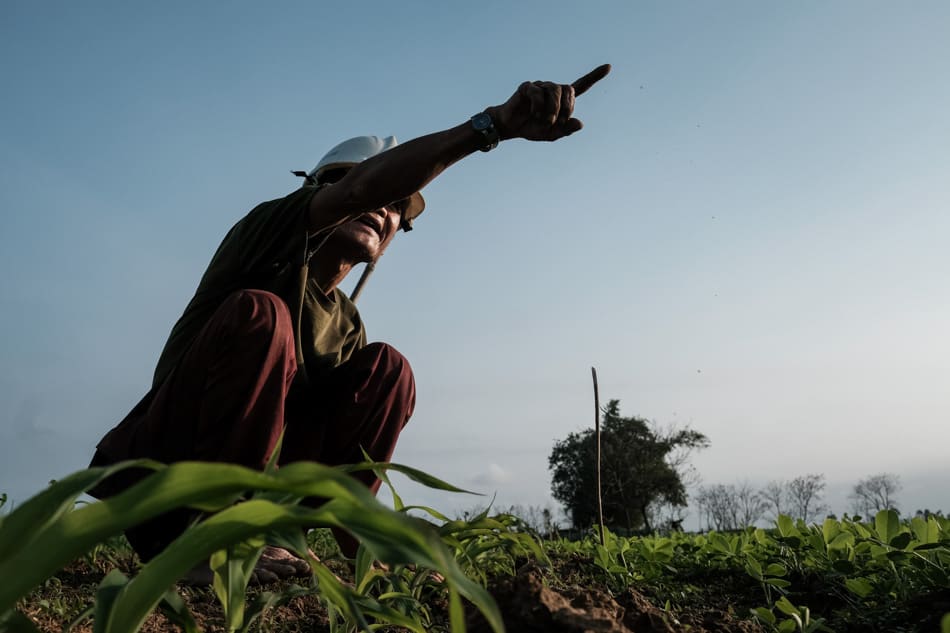 Directing your subject: a practical example

About a year ago I published an article titled “how to direct your subject in travel photography“. I suggest you head over the link if you haven’t read it yet, as it will help you understand clearly what I am talking about here. Basically, when taking photos of people it is possible to direct your subject by interacting with them, without staging the scene or even asking them to do something specific.

By now you surely know my opinion about staging photos, and we surely do not want to do that. That means we need to find other ways to influence our subjects so that we will be able to create an extra dynamism, a certain moment, making our image more interesting.

Yesterday while running the sunset photography tour around Hoi An I was met with the perfect opportunity to practice this and share it with you.

As we usually do, the group and I ended up in the beautiful and quiet peanut and corn fields on the outskirts of the city. This is one of my favourite places to shoot around Hoi An as it is still the way it used to be. While Hoi An and Vietnam, in general, is developing very quickly, its countryside remains frozen in time.

I took the group through the surrounding villages, before ending up in the peanut fields. We always find a lot of things happening in these fields as they do require a lot of work. There were several groups of people spread around the fields, and we went to visit them one by one, saying hello to the farmers and working on composition techniques. The light was good, the people were there, the students were excited, it was a lot of fun. 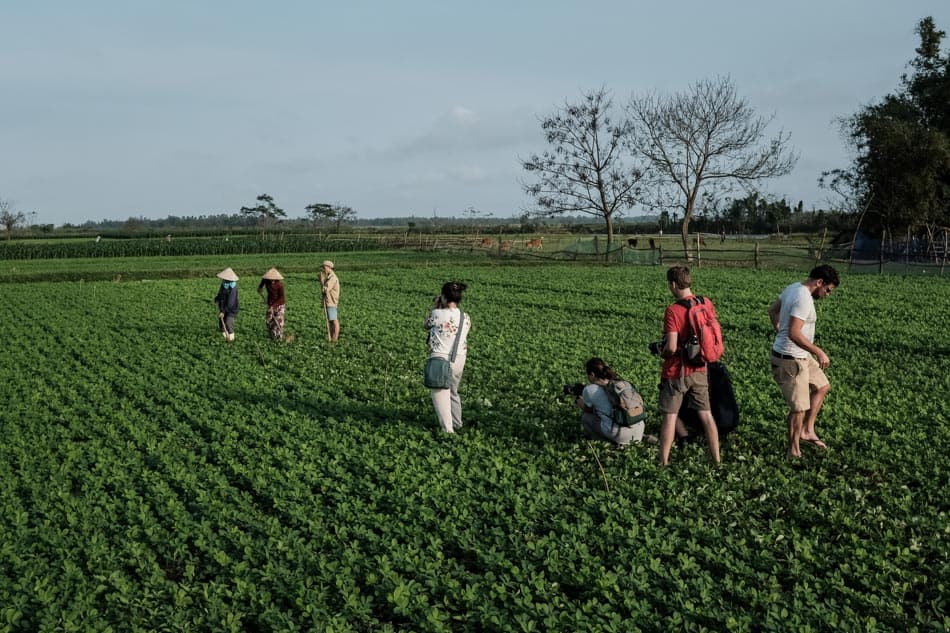 After some time taking photos of the people there, I spotted a man working by himself. I was first attracted to his white construction helmet and as the group was having a fun time playing with a group of 3 farmers, I stepped on the side and went to say hi to him. I do visit these fields pretty regularly (about once or twice a week) and tend to know the people working there. But I had never met this man so I went to say hi.

At first, the man was busy ploughing the land around the peanuts but decided to take a break as I came towards him. People are always very curious to strike a conversation with us, mostly if we can speak with them. My Vietnamese language skills being sufficient for a basic conversation, it makes the whole process easier and faster, but as I often say, this is possible for anyone to do, as communication is not only verbal. There are many ways to communicate with people, as I already talked about here.

Of course, I came to meet the man with my camera down. You don’t want to stress people from the first encounter by sticking your camera in their faces. Take your time, come closer, and start showing interest. I first asked him if he was working in the field alone, and how long had he been working in there. The usual things, along with “what’s your name” and “how old are you”. This may sound a bit surprising for most of you but it is the usual beginning of any conversation in Vietnam. 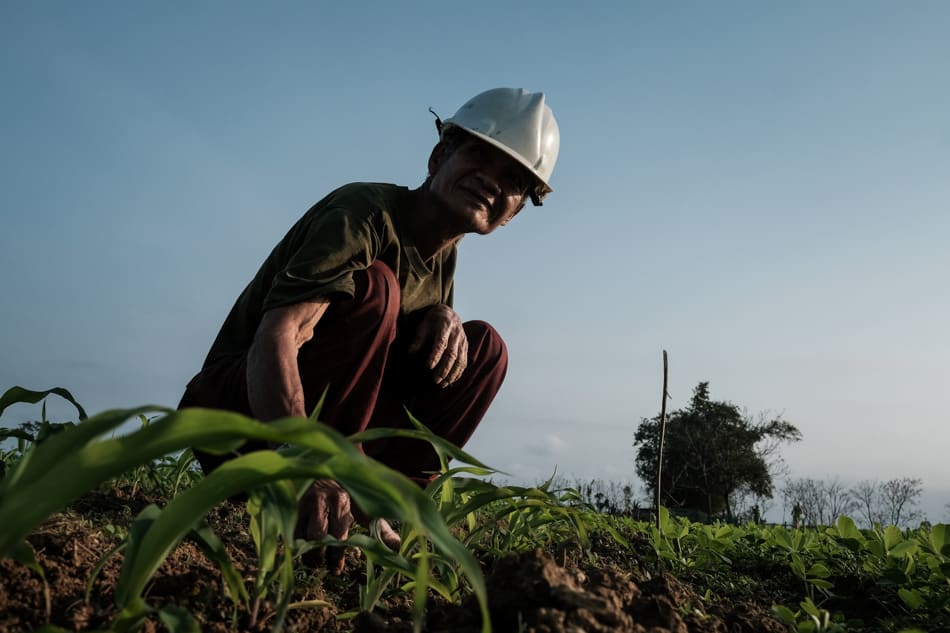 Luckily for me, the man decided to take his break by squatting down and face himself towards the light. He was actually paying attention to my group and that made him face the sunset light. I thought that was perfect for this situation, and I started composing my image using the nice simple blue sky as a background. Using a mirrorless camera, I could easily frame my image while talking to him, holding my camera with my right hand, close to the ground.

I ended up with this very simple type of composition, but something was definitely missing. I had an interesting balance between the man and the bush in the background, but there was a clear lack of dynamism, and “moment”. I looked at the image and thought “well this is just a man in front of a blue sky”. There was no particular dynamism and the story lacked any real interest.

From time to time the man kept working, picking up roots and grass from the floor. That made him face down and I thought the semi-silhouetted profile looked quite interesting. But still… not enough for a good picture. 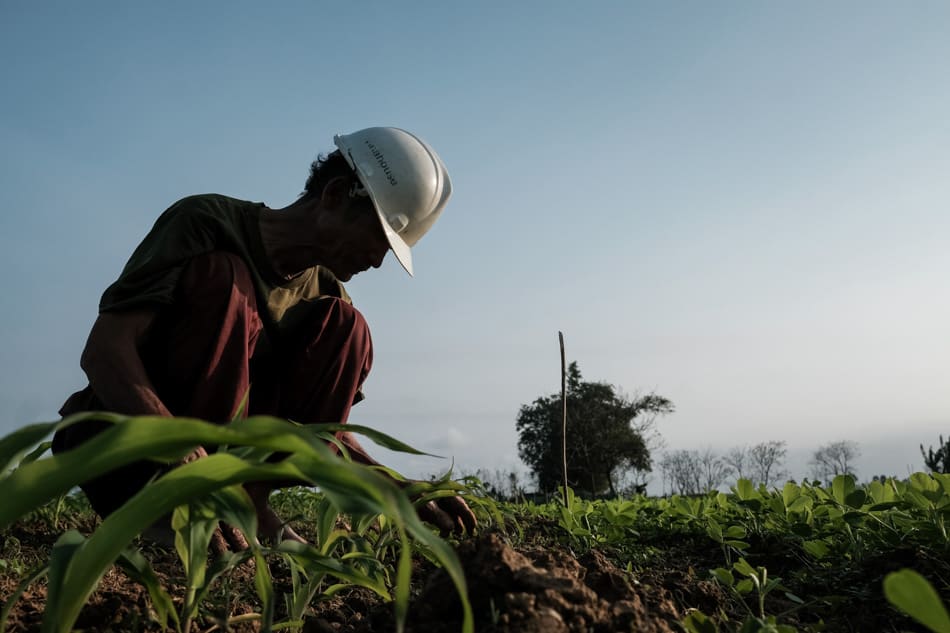 Then came the time to star the direction.

It would be way too easy to ask your subject to do what you want. Mostly in Asia, where people are very friendly and accommodating, a lot of photographers stage their images, ask their subjects to pose in a certain way, or even hire models and place them in a certain environment. Once again, there is nothing wrong with that if this is the type of photography you like doing, AS LONG AS you are honest about what you do and do not lie about having staged a scene.

So my goal here was to try and have him fill the empty space of my frame, mostly the top right corner. This could happen if the man points in that direction, or even simply look into that direction, creating a dynamic diagonal line from his eyes to the top right edge of the frame. The general rule when interacting with people is that people tend to look in the direction of what they are talking about. I needed to find something to talk about that was located in that direction. Lucky for me, my group was right there.

So I simply asked him if he has already met “foreigners” in the fields. And guess what he did? He looked at my group and told me he didn’t know why we came to take photos here. 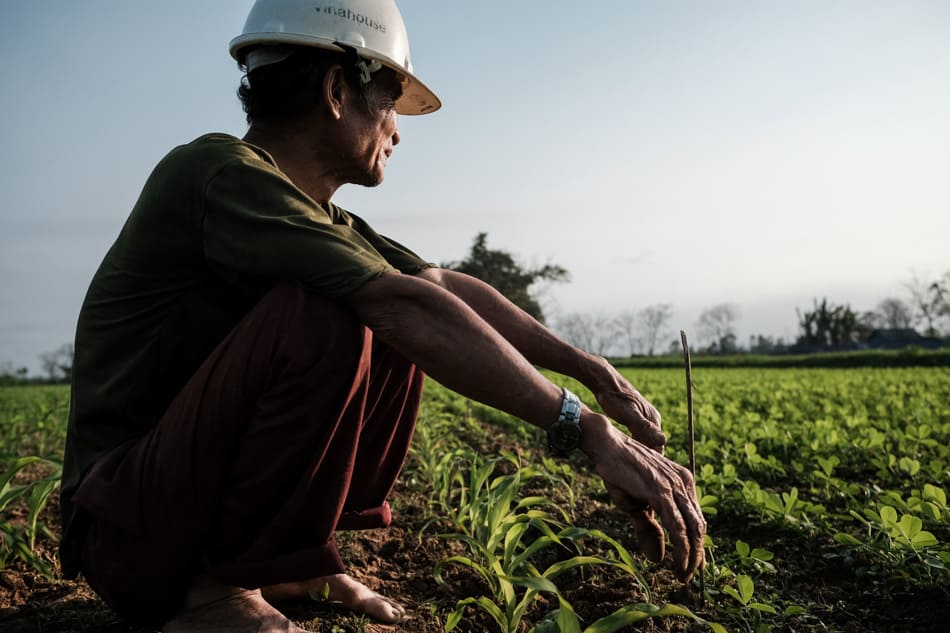 Things started to happen the way I wanted to but still, the image lacked interest and dynamism. Because of the simplicity of the composition, only having the blue sky in the background, I couldn’t create a dynamic composition only using the elements within my frame. I had to rely on the dynamism of my subject to make things pop out a little more. I had to create a dynamic body gesture.

The chance I had yesterday is that I had never met this man before, so I could be asking a lot of questions about himself. So I went for the usual “where is your village?”. Of course, I knew the village right behind us was where he was living, but I had to make him look, or if I was lucky, point in that direction. And of course, this is just what he did.

Right before he pointed towards the top right of my frame I quickly readjusted the composition to balance him with the bush in the background. You can see there is a very different dynamism compared to the previous images. The straight diagonal line his arm creates is creating a line through the image, creating a certain momentum making the image more interesting.

The problem now is that his arm kept hiding his face. So I kept asking him about that, hoping at some point his arm was going to be a bit higher so to also see his face which was in the sunset light. The key is also to take several photos, hoping that the timing will be right when the arm doesn’t hide his face. you are most probably shooting with a digital camera so do not be shy to take more than one photo. 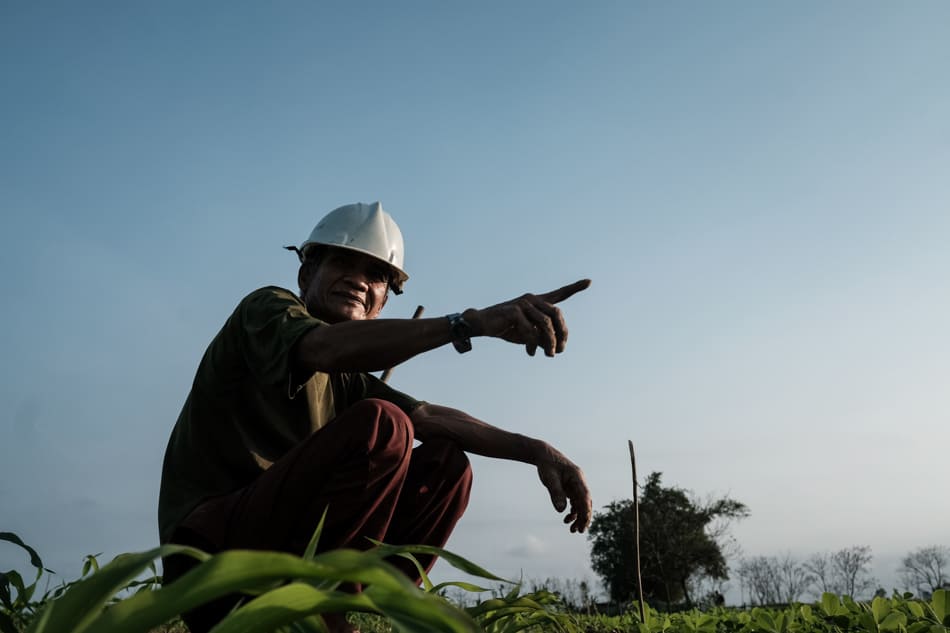 Now I could see his arm and his face, but the direction of the arm didn’t create the dynamism I had in the previous image and that wasn’t enough for me to make it an interesting image.

We had been chatting for a good 3 minutes (yes time flies!) and I started to run out of things to ask about his house or his village.

When I do not know what to do, very simple, I put the camera down and I analyze the scene. I don’t really know what I am looking for (that is most of the time!) so I just chat with my subjects, waiting for something to happen, or for my eyes to catch something new. This is also a time to actually enjoy the conversation with the people, genuinely getting to know them and understand their lives. What I did, in this case, is asking him how come I never met him before. I do spend a lot of time in these fields but had never met the man. He told me that he was often working on construction sites in Hoi An and rarely had time to come and help in the fields. I asked him if he was building houses or hotels, and this is when he started pointing towards Hoi An.

I told you guys, that rule does work all the time. When people talk about something, they look or point in the direction of what they talk about. 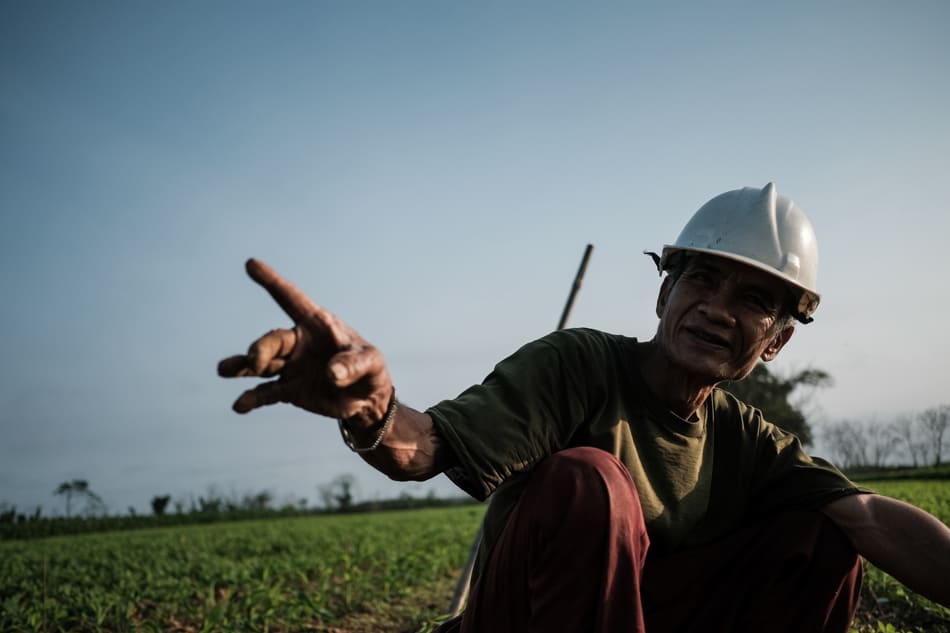 As it happened I took a quick frame (my finger was still half-pressed on the shutter) but had no time to recompose. So I decided to work on this composition a little more, and I asked him in which area of Hoi An does he usually work. And of course, the magic happened again. 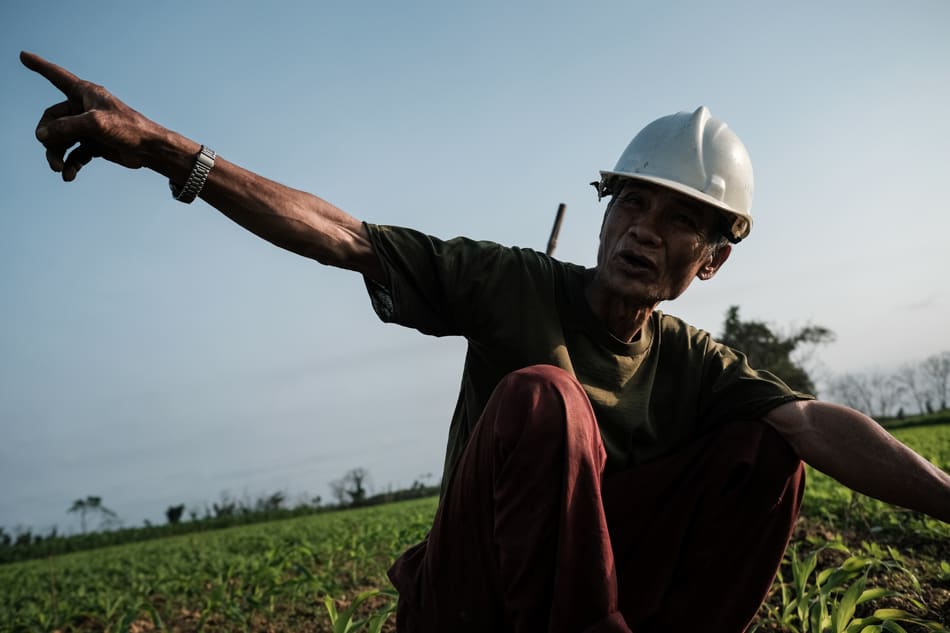 In the end, this is still not a fantastic image but I actually had a lot of fun talking to this man and “directing” him. It is a very good practice and I recommend you keep these techniques in mind when interacting with your subjects. Not only you will be able to “move” them they way you want, but creating the interaction and discussion with them will lead to unexpected reactions and original compositions.

And remember, Travel photography is also about travelling, so be respectful, open-minded, and you will experience much more!

Now go and shoot, and have fun doing it!