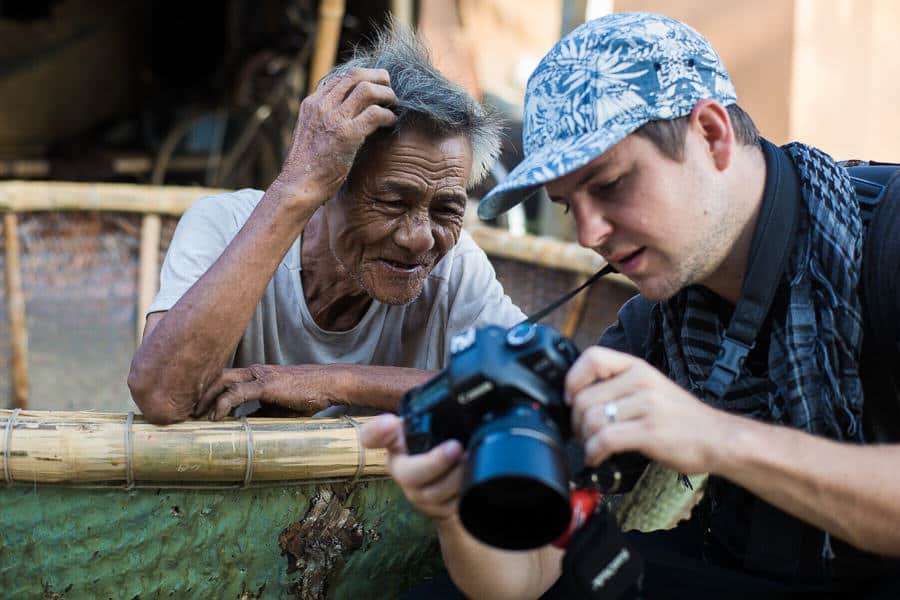 The sun was on the horizon, a perfect orange ball. It was another beautiful sunset in Hoi An, Vietnam and we were out on a photo tour through a local village – taking advantage of the dreamy light. While the group spread out to take photos of people harvesting rice in the paddies, I noticed one of my students walking back toward me. She appeared hunched over in defeat. “What’s going on?” I asked. She replied, “I went to take a picture of a woman and she asked me for money – so I left and didn’t take the photo.” Unfortunately, this is something I’d heard many times before.

While traveling in Asia, it is likely that you will be approached by a local asking for money. As a reader of a travel photo blog, you already know that the more time spent visiting tourist-dense locations, the more often locals will approach you for money. This is because someone, many times before you has handed out money. Thus, establishing the common stereotype that all Westerners are rich and will give away their money. The more tourists continue to give money when asked, the more this stereotype has been reinforced. Unfortunately, it’s now to the point that in order to change this practice, it could take decades.

As you may know, developing countries are very money orientated cultures. No one to blame here, but it is an expected thing for people who come from difficult situations to try and make more money today. As I live in Vietnam I will use the Vietnamese example: Vietnam is also a very business-oriented, and historically a trading culture. As tourism has grown, so have the business opportunities. This is good for the economy, and money has become a larger priority. For example, if you could understand Vietnamese while walking through a market, you would hear that most people are conversing about money, all the time.

Because of this, money inhabits a large portion of people’s minds. So much so, that if you visit the countryside, where most people don’t speak English, they will at least know the word ‘money’. This is because anyone who has a sister, an uncle, or a cousin who’s taught them “if you see a foreigner ask them for money because they are rich”. 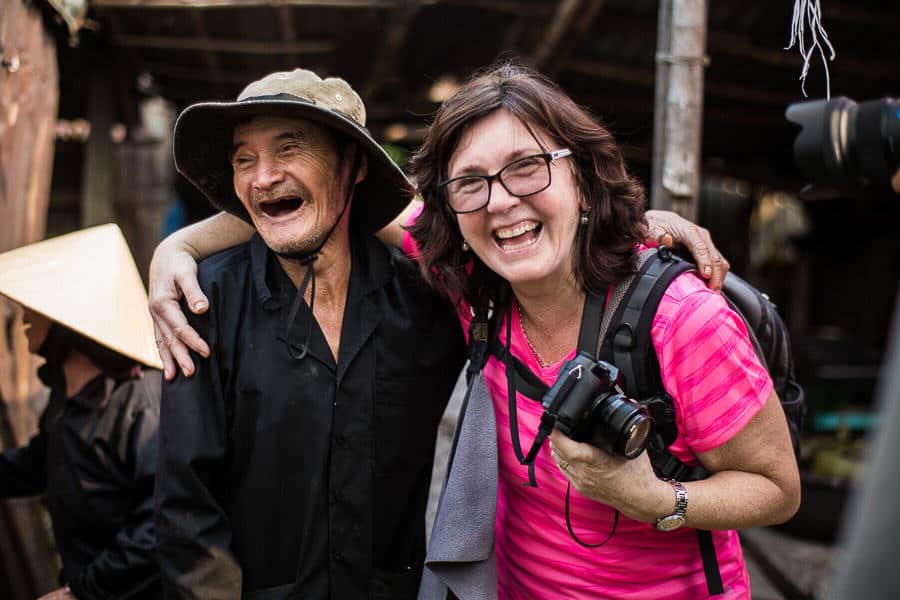 Take a minute to imagine that the only word you know in another, very popular, language was money — of course, this is the word that you will say most often. The problem is that the tourists hearing the ask for money tend to take it very literally when it should be apparent by the asker’s non-verbal cues that they are joking. There is a little rhyme in Vietnam, “Hello, cho em nam do” – which translates to “Hello, give me five dollars”. They are not asking you for five dollars, this is a rhyme, a common joke among people, reinforcing the stereotype that Westerners are rich. In fact, Vietnam is all about preserving the face — so to genuinely ask for money would be admitting poverty. Ironically, locals aren’t supposed to ask for money. Thus, it’s clear that they are just playing around.

My advice: take a second to look at the local’s face – see their smile – know when they are joking! And if you can joke back, you will quickly understand that all is fine. Do not be defeated, intimidated, or turned off by someone if they ask you for money – the interaction doesn’t have to abruptly end here. Smile back, continue to reach out in a light-hearted manner – you will get the synergy, and probably the photo, you are hoping for.

Sometimes I even say the rhyme when I arrive somewhere and meet a group of people. Some will greet me and I will say “hello cho em nam do!”. This usually makes everyone laugh. There will be no more talking about money after that. 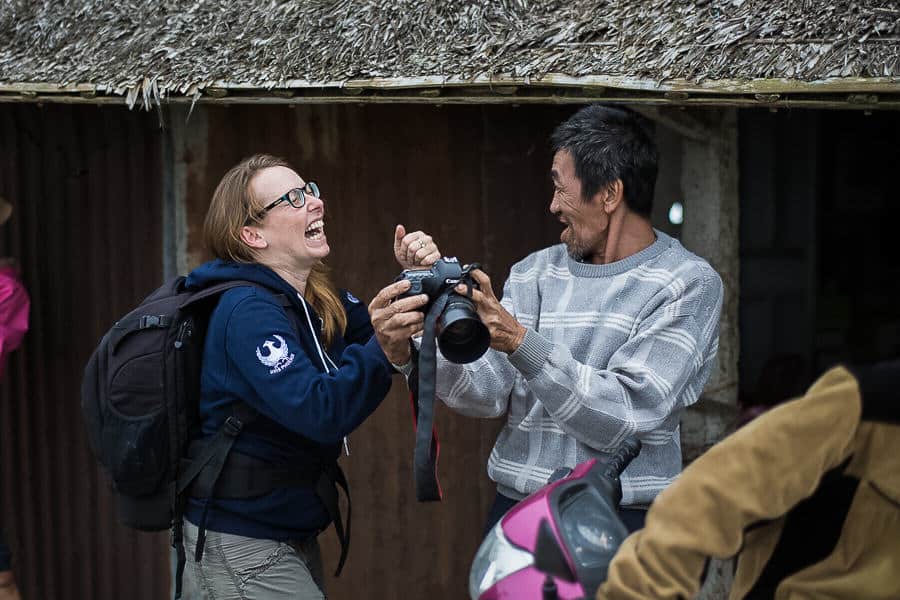 Give the people something back

I also realize that the more I go to a certain location, and I get to know the people living there, the less they ask me for money. Because I didn’t start giving them money in the first place and tried to build a long-term relationship with them, we are now friends. I can now bring groups of photographers to these locations and people are very happy to have us going around and taking photos of their activities (working in the fields or at home). But as I often say, we are Taking photos of them. We have to Give them something back. And by giving them something I do not mean something physical. Most of the time we will give them a fun time: interacting with them, letting them learn more about these “crazy” foreigners who put their feet in the mud to take their pictures. Spend time showing them their picture on the back of your camera, they love it! Once you have taken your photo (or before), spend a little time having a real open exchange with them. You can do that using your hands and smile, but try as much as you can to show interest in them and what they are doing. The locals love it!

We are taking their photos, we need to give them something back!

As the perceived-to-be rich Westerner, it is our duty to bring a halt to such stereotypes. If someone asks you for money and you give it to them, you may be harming them more than helping. This is known as enabling vs. empowering. To enable a fisherman is to overpay him for a fish. To empower him is to teach him proper fishing techniques so that he can catch more of the bigger fish. Another example of enabling is giving money to children. You are not helping them at all and may create a dependence on begging. Their parents may send them to beg on the streets instead of school.

Make sense? What will help people the most, not just the locals you visit, has to be long-term – the solution must put the power, the education, the skills and the resources back in their capable hands.

Of course, there are situations where giving someone food, water, and clothes is appropriate. Currently, there are massive famines in Somalia, Yemen, and a few other countries. These people need to be given food and water before they can be taught proper farming techniques. They are in crisis – relief and handouts are necessary. Outside of a crisis, long-term development and empowering individuals and communities is the only solution. But you are not going to visit these places and hand over money to everyone, are you? If you want to help, there are alternative ways. 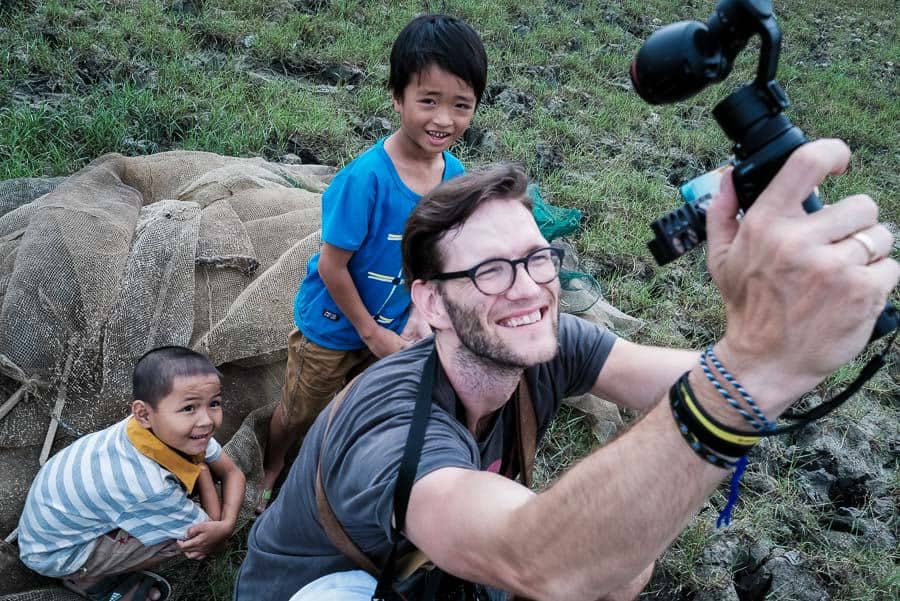 What Can You Do?

So, where does this leave you – when a person asks you for money and your heart tells you to give?

Firstly, smile – then consider the circumstance. I may give money to a very elderly or disabled person because I know that they are unable to keep a job. Or even better, I would sit with them and buy the food. Not only you know that you are really helping them but by spending more time with them you may have an opportunity to take some quality photos.

I may also offer money to locals if it’s in exchange their services. For example, asking a local person to take you on their boat for some photos on the lake deserves financial compensation. Another example, in Hoi An there are women who carry around baskets of fruit with the purpose of posing for tourist’s photos. In a sense, they are full-time professional models. In this case, it is okay to pay them to take their photos as you are supporting their job. But be aware of how much you give!

If you are looking for alternative ways to assist individuals and communities, consider partnering with a local NGO. Or, if you have the time to get to know the real needs of people, you could do as I do and fundraise money. Once a year I select a family in need who lives in one of the fishing villages that we frequent on the photo tour. Last year we were able to support a family to repair their very leaky roof.

As an outsider, a tourist, it is your responsibility to learn how to be a smart traveller. Do your research, and stop enabling people and communities with quick handouts. For instance, be aware that many middle-aged men who ask for money are planning to buy alcohol –  learn how to read people before you give.

Get creative! If you are taking someone’s photo, bring an Instax along and leave them with a copy of their picture. Take pens and notebooks with you when you go out. But not money. And if you’re left feeling too overwhelmed by people asking for your money, try exploring places less touristed – you will find the people to be more genuine. Remember, when travelling in developing countries and asked for money, truly consider the situation. It shouldn’t deter you from taking a photo or getting to know someone. And if someone insists that you have to give them money and becomes upset if you don’t, you are presumably in the wrong place – perceived to be a giant wallet. How sad. You are supposed to do like all the other photographers who came here: pay for photos. So you can expect to take the same photo as all the other photographers? There are no good photos to be taken here. Move along. 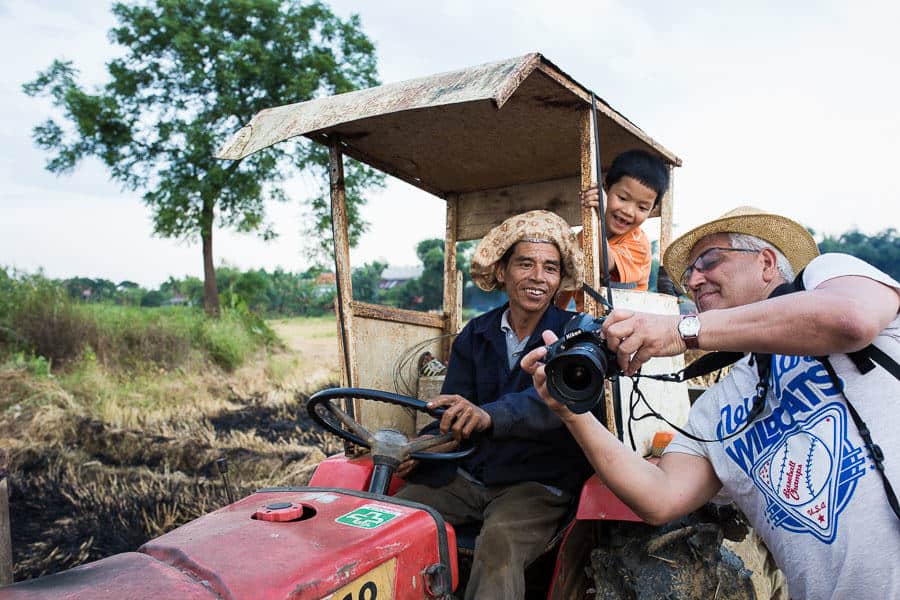