Lesson learned from not staging photos 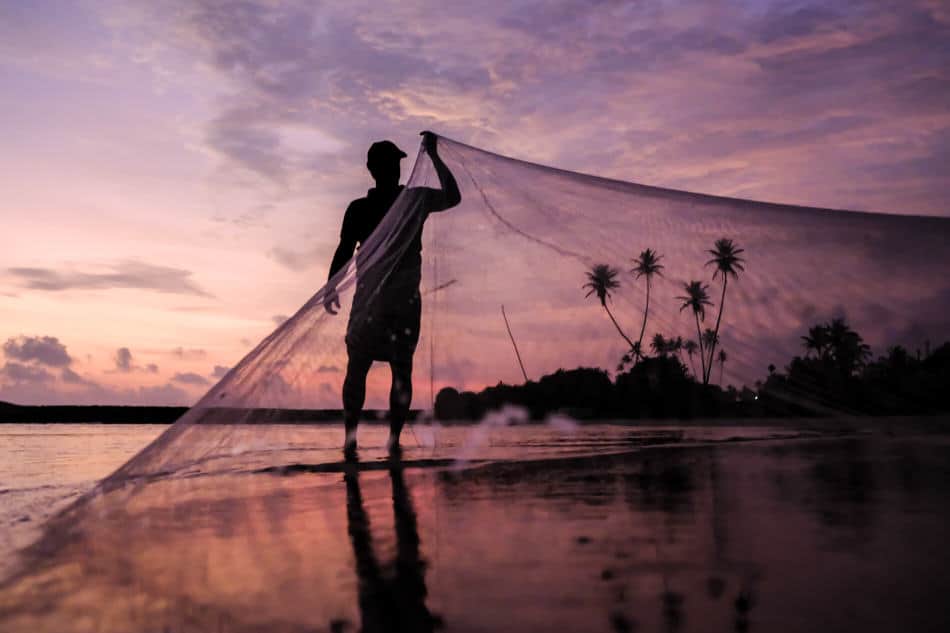 Lesson learned from not staging photos

While in Sri Lanka for my exploration trip, my friend Kevin and I were looking for the fishermen on stilts outside Mirissa. This iconic photo of Sri Lanka is something I would have liked to capture, under the condition that the fishermen were “real”. I heard many stories about them posing for tourists in exchange for money, which is something I am not interesting to capture.

And indeed, on the way, we saw plenty of “fishermen models”, who had even created small parking spots next to their sticks for tourist buses to stop. They were letting people take selfies on their sticks and were surely charing a good amount of money for a photo of them pretending to fish. Their sticks were conveniently placed very close to the road in order to allow everyone to get an easy shot.

Anyway, as we were not interested in that we kept driving to find more “real” fishermen. We ended up by accident on a nice piece of beach where 7 pols were coming out of the water. It looked much more real as they were not all next to each other for the pretty picture, and they were hidden from the road. We thought that it would be our best chance to capture them. No one came to talk to us offering us to pose for our photos, just some people enjoying a late afternoon time on the beach. 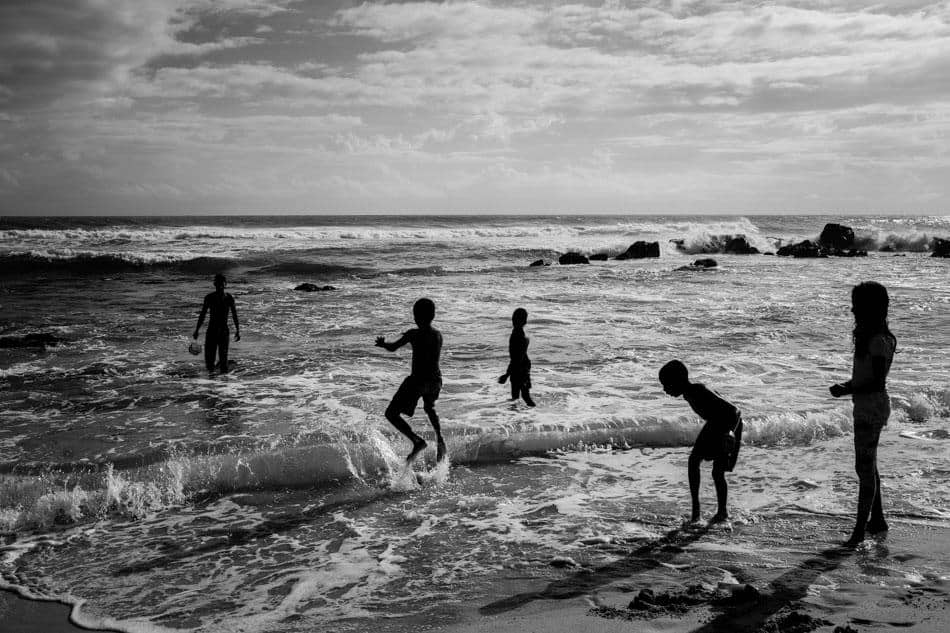 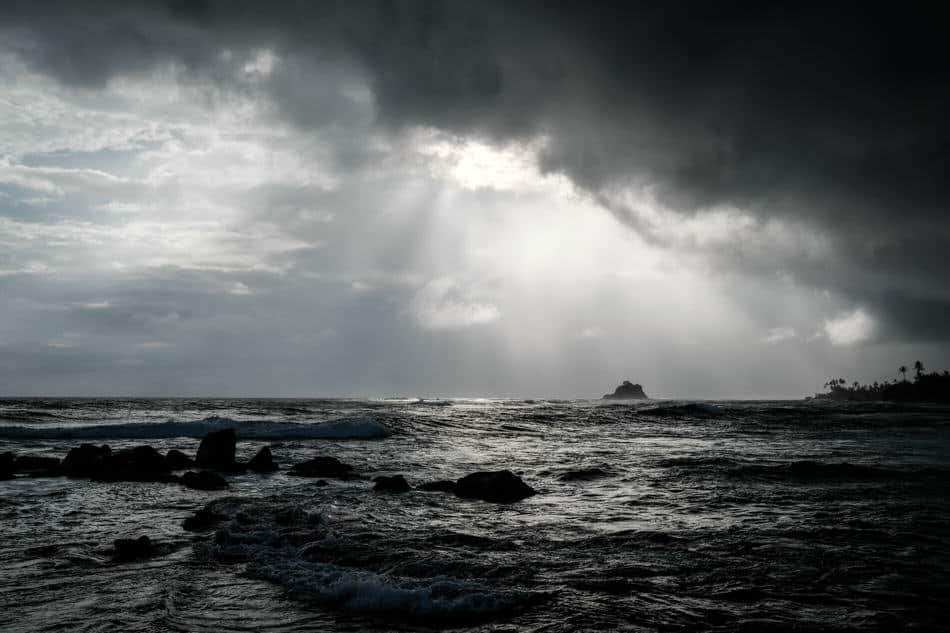 We spent over 2 hours on that beach, chatting with locals and taking photos of the people swimming. The light was just phenomenal! We were super excited hoping to see the fisherman as someone told us that they usually come around 5 pm. The problem is that is was a Sunday and they might not be coming on that day. Plus someone else told us soon after that they were no longer coming as they used to, as it is a disappearing form of fishing.

Unfortunately, they never showed up. The light went from phenomenal to absolutely divine to out of another planet. It would have been the photo of the trip if they had shown up, but they didn’t. Before 6 pm we decided to drive back to Galle but first I wanted to take a look at the “fake” fishermen. Mostly I was curious to ask them how much they charge for photos. Many people have told me about the fishermen and many people will be asking me about them, so I needed to know about the current situation. 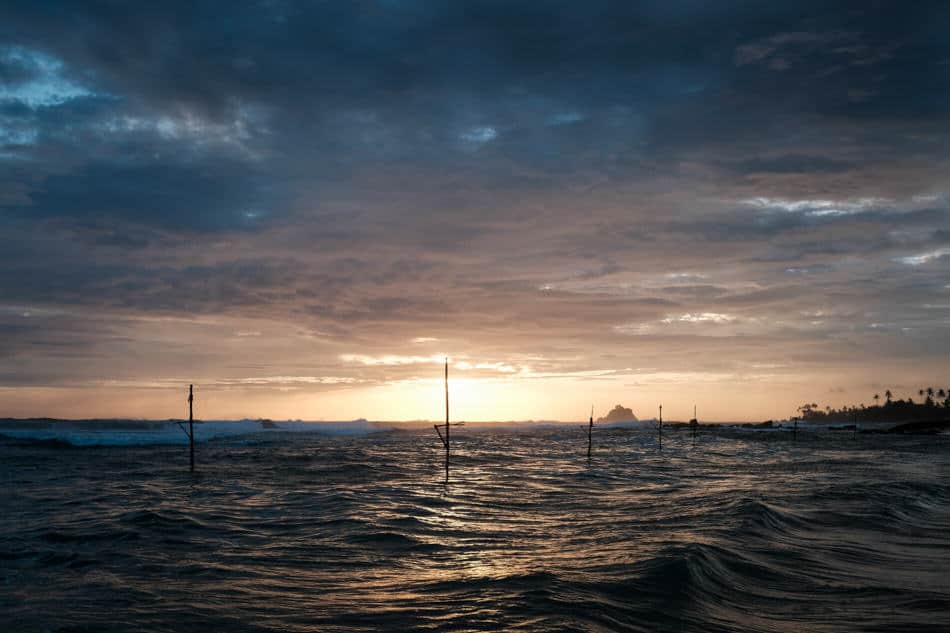 On our way there we saw a few silhouettes walking in the water. After getting closer we realized they were men with fishing net standing in the water. The sun had just set and the colors were beautiful. We parked the bike and went down to greet them. One man was on the shore apparently reorganizing his fishing net. We said hello, and as I took off my shoes and t-shirt to go into the water he told me in a broken English “Throw the net, give me xxx Rupees”. I didn’t hear exactly what he said or how much he was asking but I smiled and gently told him to just go back to what he was doing. We were heading towards the two other men in the water. As you know, I am not interested to take a photo of something which is staged. 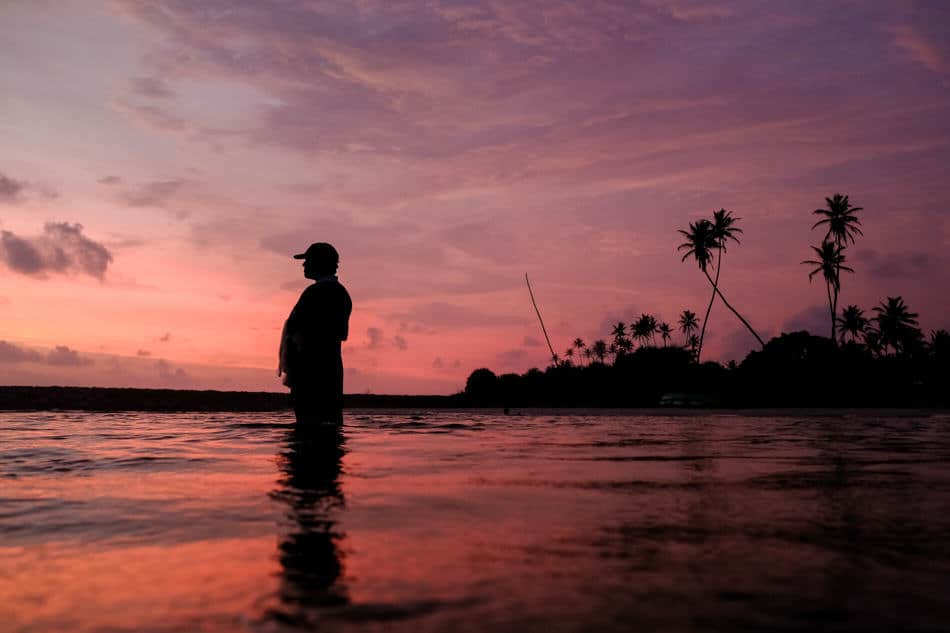 The three men were just standing still in the water, about waist deep. This was the entrance of a lagoon so there were strong currents and probably fish going by. They stood with their nets in their hands and were looking for fish. Only when they saw fish they would throw the net.

One man was out of our reach (too deep water to cross with a camera in hand!) and the man we first went to meet started to walk away. He went to install some nets through the current. Only the first man, who had asked me for money was there. We were pretty close to him, like 3 meters away, so we started waiting along with him. He looked at us a few times and gestured that he could throw the net if we wanted, but we were telling him “no fish no photo!”. As the light was quickly fading though, I was really hoping that some fish would come by!

After about 15 minutes, there was obviously no more fish. The man was watching the water, and nothing was happening. It was getting dark and I had to push my ISO to the 5000 already, so after waiving goodbye we started to head back to the shore. At that moment, the man gestured to me that he was going to throw the net anyway. We quickly went back into position and took a series of images of him throwing his net. 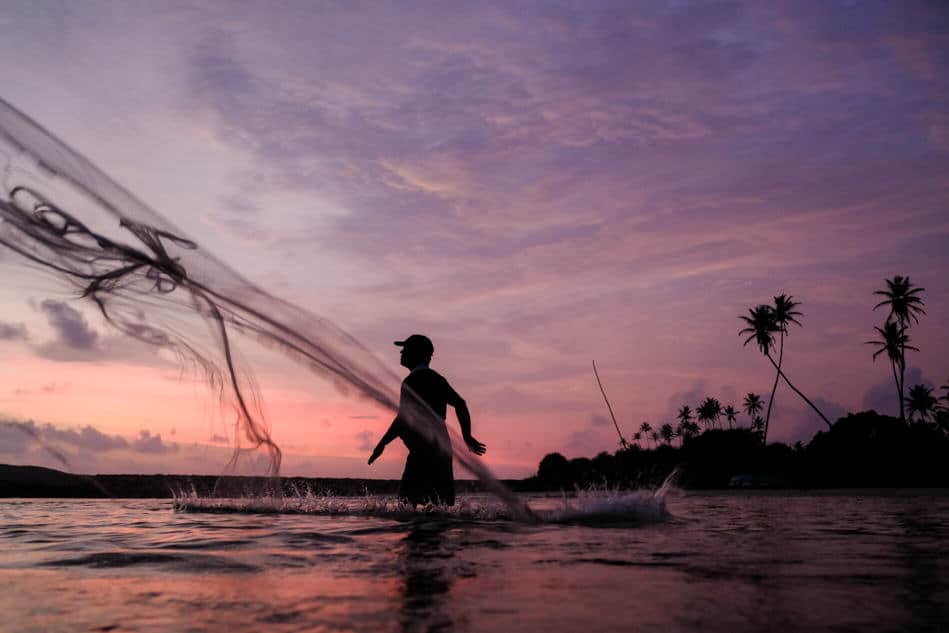 At that time my ethic button started to itch. The man didn’t throw his net to catch fish but we also didn’t ask him to throw his net for our shot. Was I right to have taken this photo or not, I really didn’t know?

Anyway, we thanked him and started to head back. I was expecting the man to ask us for money again but he never did. Apparently, and as we could see with the other fisherman standing on the other side of the river, they do throw their nets in the water a last time before leaving as a way to clean it.

As we arrived at the shore I started wearing my t-shirt back when my mate Kevin told me the man was coming behind us. I thought he was coming to ask for money and I was happy to give him something for letting us hang out around him for so long, but he spread his net on the sandy shore and started cleaning the small weeds that were stuck in it.

This is when the magic happened. We were ready to leave but saw the continuation of the fisherman’s work, his workflow if you prefer, and that was the best image of the afternoon.

If we had staged a photo of the man we would have tried hard to get a nice image of him throwing his net. Personally, I have a lot of images of people throwing nets in South East Asia but not once I felt they were strong images. The photo we took of him throwing his net had nothing great in my opinion. After capturing our staged image we would have paid him, say goodbye and walk away.

But as we stayed there for over 15 minutes (lucky the water was warm!) we managed to see something we didn’t imagine, something new and original in our mind, allowing us more creativity.

Do not stage your images. Wait for the real things to happen, and you may be pleasantly surprised with the things that can happen.