On my recent trip to Bangladesh, I really wanted to go and visit the brick factories around Dhaka. I heard great things about them (in terms of photography of course) and really wanted to spend some time there.

After explaining my hotel receptionist that I wanted to go there, he recommended that I don’t because it would be “unsafe”. This is a usual thing I faced in Bangladesh, people worry about you, they want to make sure you are all right, so telling you that anywhere outside the beaten tracks is “unsafe”. 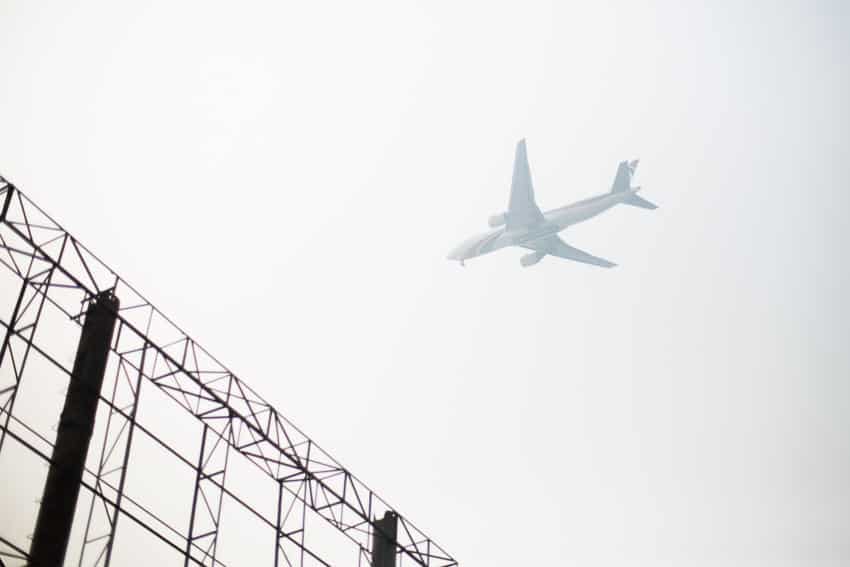 Anyway, after a rough 45 minutes rickshaw drive in the smog and dust I reached a river side. The rickshaw driver pointed to a small ferry boat crossing it. I was on my way to the famous brick factories of Dhaka.

Quite an impressive scenery really. Someone told me there are 1000 of these chimney around the city. Because of the smog around the city, I couldn’t see that far away, but I could see a good dozen of them. The whole fields around were used by local farmers to grow cabbage and cauliflower. 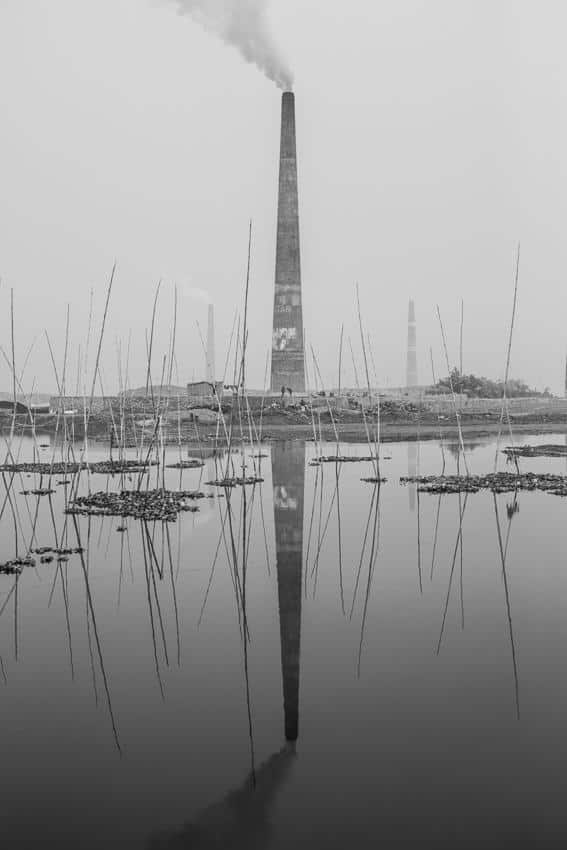 The first thing that stroke me is that workers there (of all gender and age) still dress in their very colorful clothes. Coming from Vietnam where workers dress in pretty dull colors, that was a new thing. People directly approached me, smiled, said hello, and came to meet me and greet me. Bengali people have such a good time just watching you, getting to know you and asking you where you are from. It was for sure everything but “unsafe”! 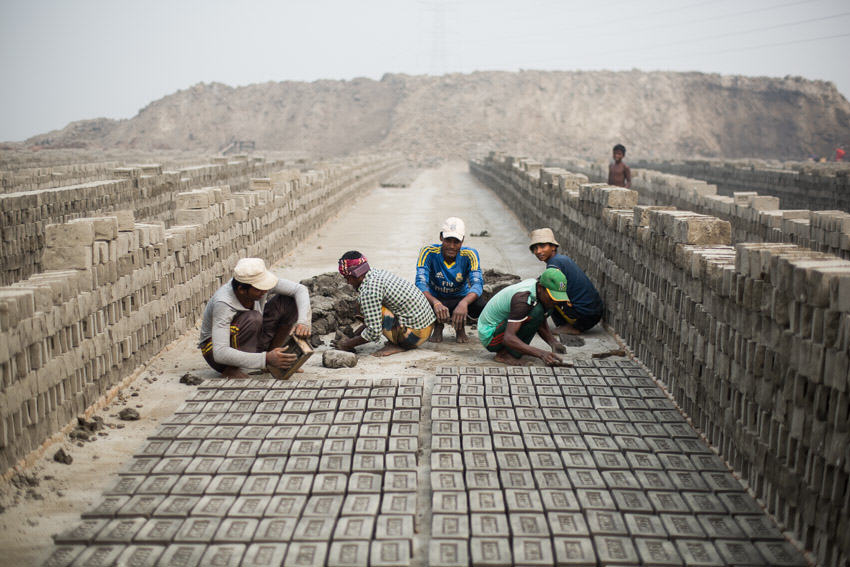 Lots of children were working in these places, carrying bricks and helping mum and dad. I know their parents would rather send them to school, but when there is no money everyone has to work.

Most people there are basically carrying bricks from one place to the other. There are the people making the bricks (shoveling clay into a big machine), people carrying the bricks so they can dry and the sun, then carrying them into the massive ovens under the chimney. 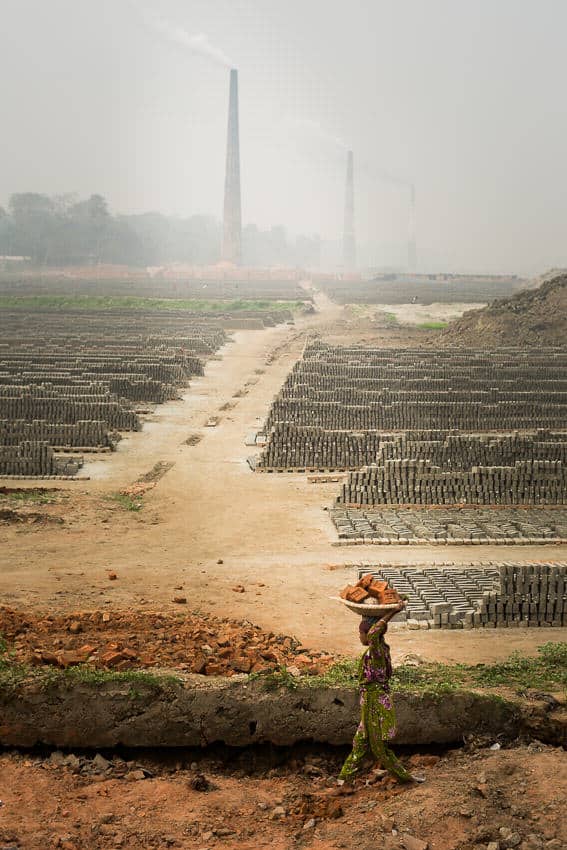 One of the man there who could speak English told me people there make about 1.6 dollars for carrying 1000 bricks on their heads. As they can carry about 12 bricks each time (and that is very heavy!) they need to do about 83 journeys to make that amount of money. The journey is about 100 meters.

Walking over 8 kilometers carrying heavy bricks on your head, to make $1.6. Just imagine.

As the women carry the bricks out of the oven, these are covered with red dust that constantly falls into their eyes, adding difficulty to the task. 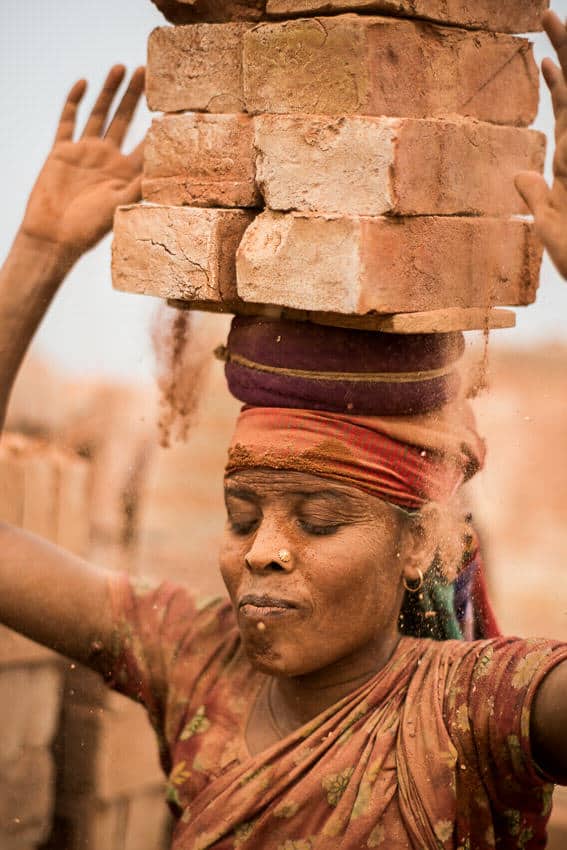 But everyone is so smiley, so happy to have a foreigner around taking photos and playing with them. A kind of naive happiness was floating in the air, along smoke and dust.

I could see some little housing where some kids were playing in, I guess some of the workers coming from the countryside live there, in terrible conditions. 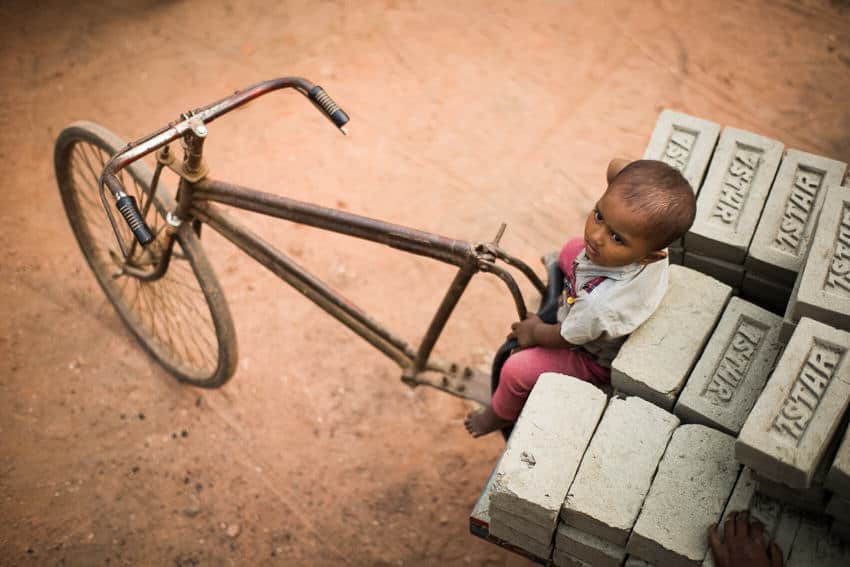 I will be heading back there at the end of 2016, and I would recommend anyone going there to bring things like soap and toothpaste that people can use. 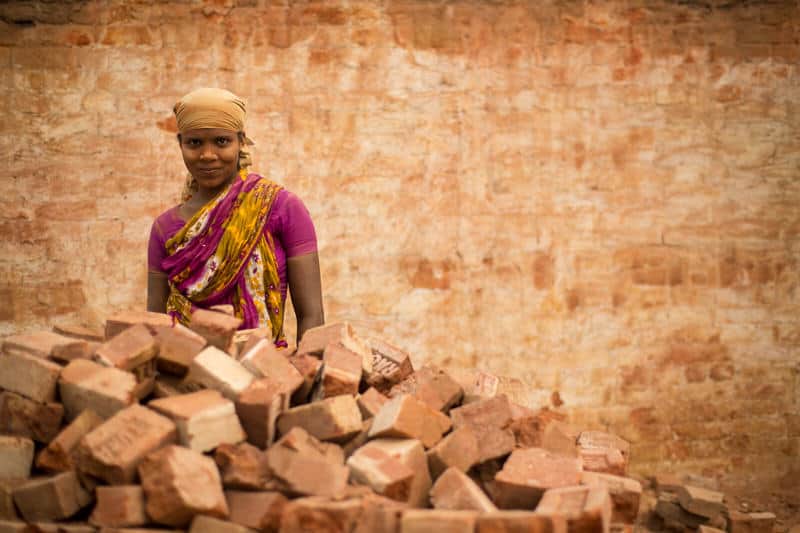 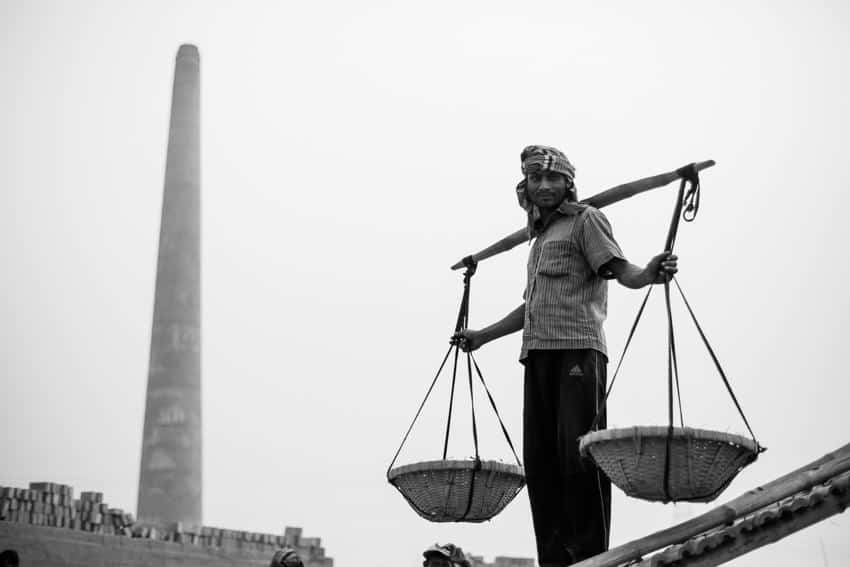 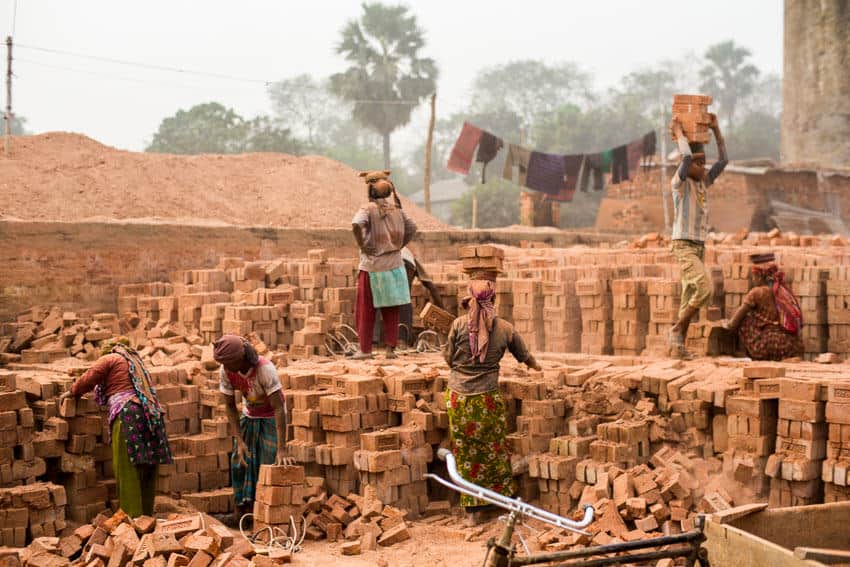 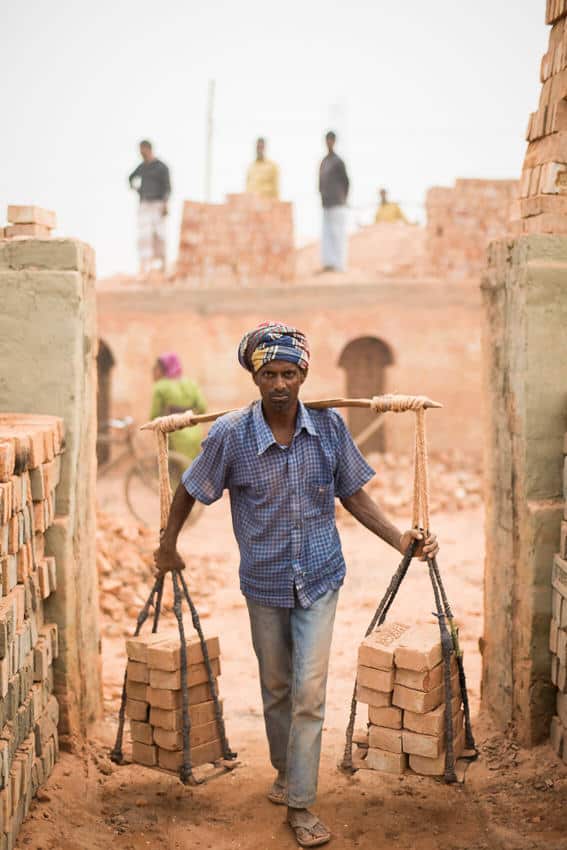 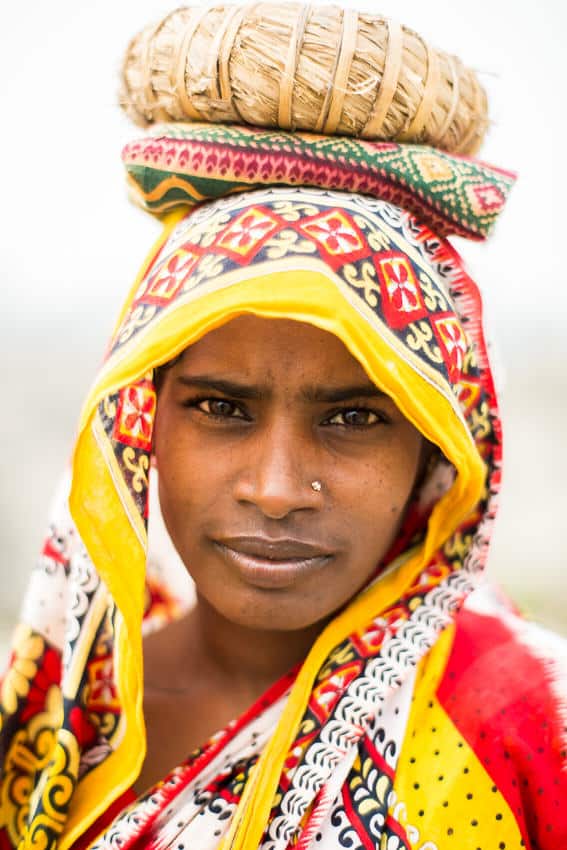 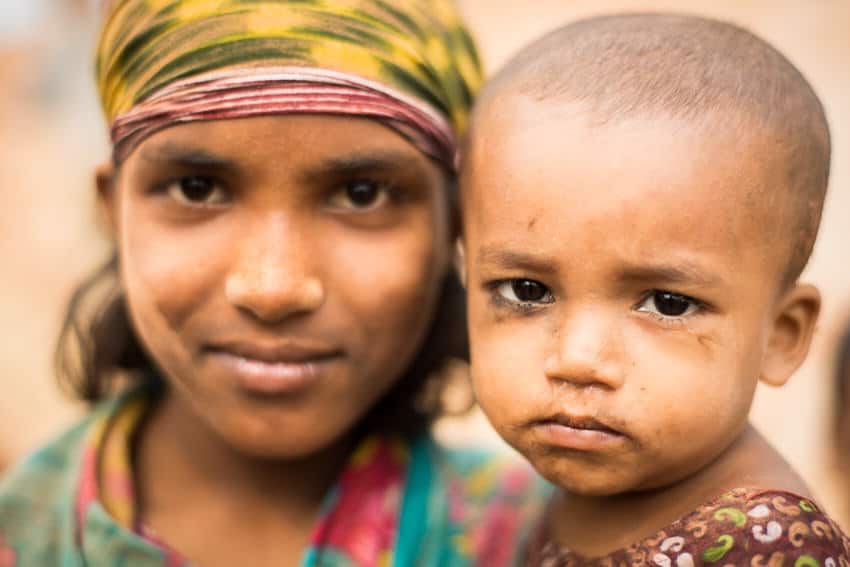