Discovering the lost city of Keshit

This is a story that I never saw coming. The best moment I personally experienced last year during my usual trips through Asia. I wasn’t even looking for anything. But there it appeared before me.

The lost city of Keshit.

It was my second trip to Iran and this time my goal was to venture deeper into the deserts of the country. Iran has a lot of deserts so I had some troubles deciding where to go. After a long discussion with some local friends, I decided to head to the Kerman area with a friend. We realized that our trip there would match with the full moon and it would be a great opportunity for some night photography, mostly since we heard the temperatures there can reach up to 70 degrees in summer. Yes, NASA says so!  Plus, it seemed to be a bit more difficult to reach so I knew we could feel a bit more like explorers. But I never expected anything so amazing.

We flew from Tehran to Kerman, where we spent our first night. The air is extremely dry there and we instantly got a sense of having reached a more remote area of the country. Even though it is quite a big city, the architecture and simplicity give it a very Oriental feeling. There we met our driver and hired him to take us to the Lut desert we had heard about, which has been listed by the UNESCO as a world heritage site in 2016. In the morning following our arrival, we jumped into a car and drove off East the city. On the way, our driver explained to us about the Yardangs, these strange rock formations created by centuries of erosion. This was our first Yardang encounter, and we stopped the car to photograph it. 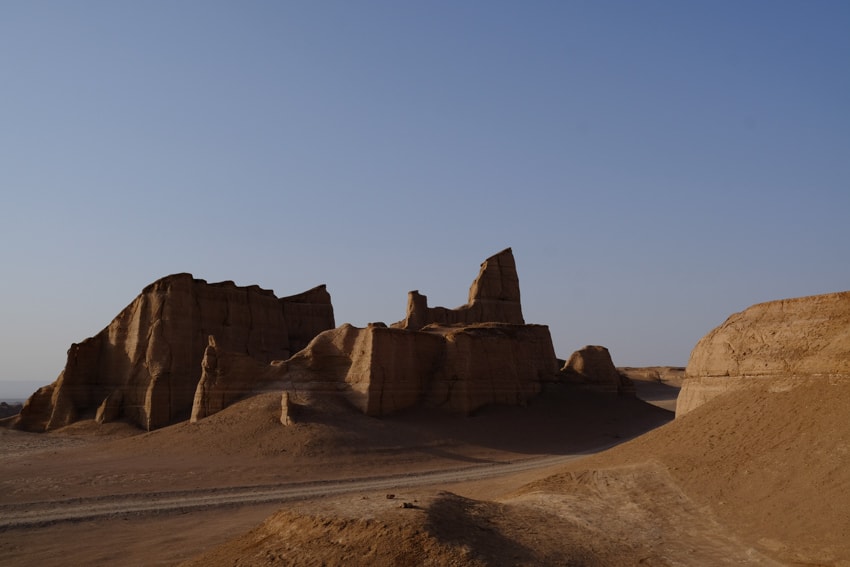 Since then, the whole trip went from amazing to supernatural! The colour of the rocks and their strange shapes made us feel like being on another planet, a feeling I shared a year earlier in that same country when visiting Qeshm and Hormuz islands. Iran is a wonder in many ways, including its geological history. After installing the tents away from the main road and having another tea, my friend and I started walking deeper into the desert. Having no living thing in these desert except a very few rare species, it felt completely silent. Being used to the hustling and bustling of life in Vietnam it was strange to me but I quickly got used to it.

Travelling to the Dasht-e Lut during the full moon had been a pretty clever idea, and allowed us to walk very easily through any rock formation without the use of light. We could easily see our shadows on the floor and gaze pretty far away. We walked for hours through the Kaluts, only carrying with us a bit of water and our tripods. Step after step, new yardangs appeared, offering numerous shapes and sizes, allowing us to play with the composition. 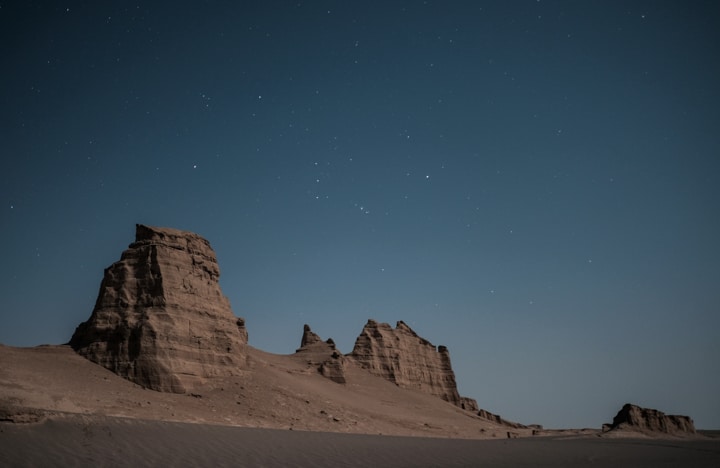 I also believe this should be an amazing place to shoot at new moon, but I am not into stars trails and milky ways and stuff. The day after we decided to head to the sand dunes, and hired some jeeps to take us to another part of the desert. Another splendid day where I wish I was a landscape photographer! 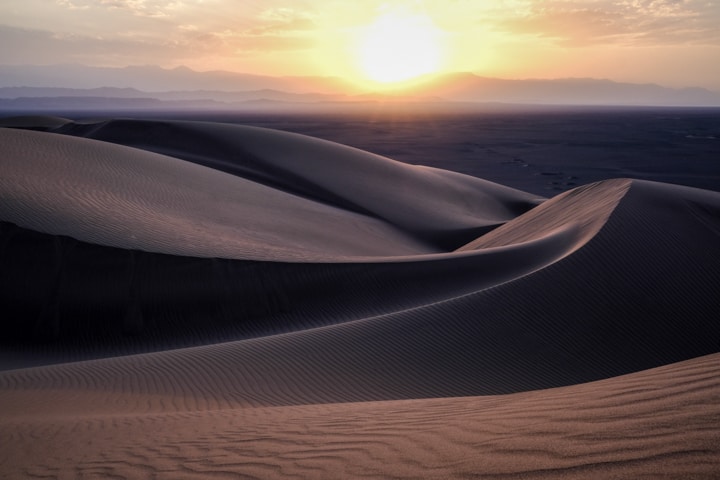 We were having a wonderful time but felt that we wanted to see more. It is not often that you come to such places, and our thirst for out of this word experiences wasn’t quenched yet. Our guide then talked to us about the Oasis of Keshit, that we could reach with the car. Looking at a few guidebooks and online, I didn’t find anything about it. A few mentions of a village and its date plantations, and it seemed the oasis was pretty spectacular. We decided, on our fourth day in the Kerman region, to drive there.

The faithful Peugeot took us through extremely arid roads, with nothing else than rocks. No grass, no trees, no one. Just rocks, and a scorching sun burning up everything. Our guides told us we were about to arrive in Keshit. This is when I saw it.

Maybe because the way it looks, straight out of an Indiana Jones movie. It just felt unreal. Like my eyes were fooling me somehow, this ancient city should not have been there. I rushed out of the car, not even taking my camera bag with me, to take a better look at it. My friend joined me and we just stood there for a while, silent. We then asked the driver (WTF IS THIS THING?) if he knew what it was. He said these are very ancient ruins. That’s all he knew.

We took our gear and told the driver that we’d be back, sometime. I was like a kid in a toy shop for the following hour: from old broken walls to houses which seemed to have been abandoned only a few years ago. A pleasure for the eye, but a real mystery for our minds. Where did that village come from? 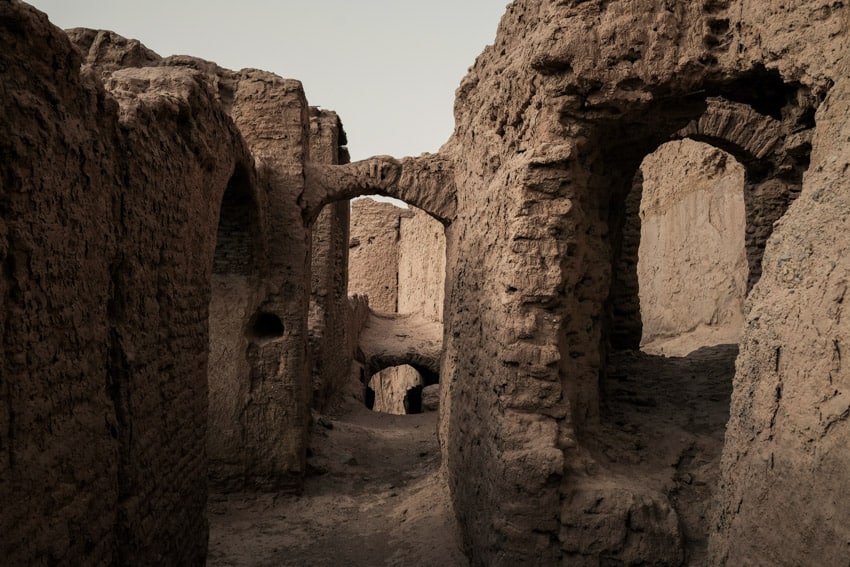 It was completely empty and even the floor was at some parts crumbling under our feet. We were somehow wishing that some people would walk by, to add a Human feel to these backgrounds. 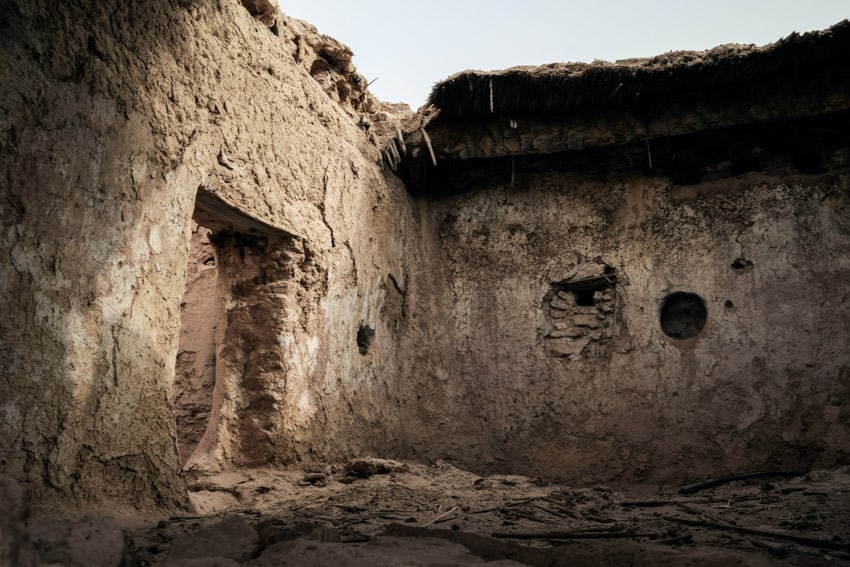 The whole village was built on a small hill that led to an old fort, also half destroyed. 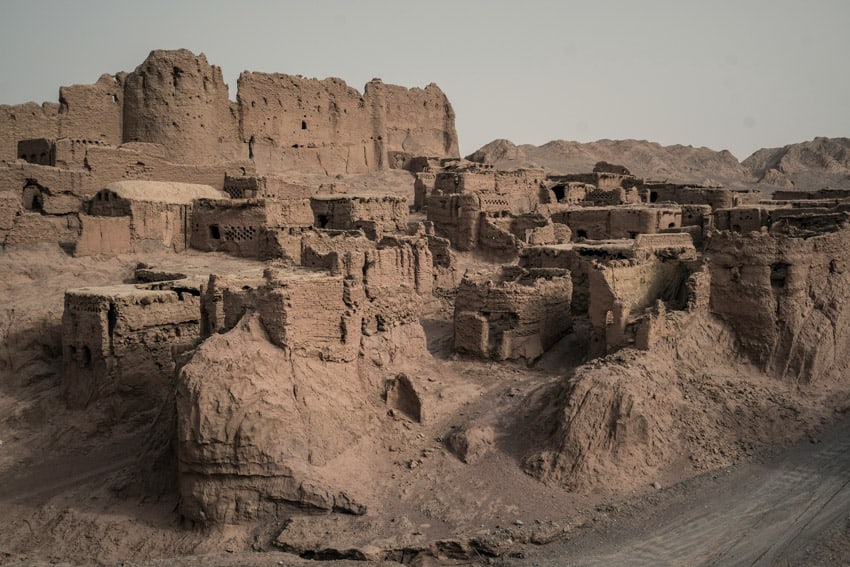 There was not a soul around and for the first few hours, we did not even notice the more modern village located about 300 metres from it, until a car drove by. We were actually spending the night in a local house right behind the ruins, so we ended up walking to the village after telling our driver to join us there.

The small village was extremely friendly as a lot of kids welcomed us on their bicycles. We were introduced to the owner of the house we were staying in, had some tea and a glorious dinner. That night, without an Internet connection, we discussed potential origins for this village. The strange thing is that some houses looked more recent than others. We asked the owner of our house and the only thing he said is that even at the time of his great-grandfather the village was deserted.

I have honestly only spent a little bit of time reading about the area and I can’t figure out what it really is. Archaeologists talk about Keshit as a late fourth and third millennia site, or a place belonging to the Seljuk empire at around 1050. But the village I saw could not be that old unless the desert has preserved it wonderfully. If you have some information, please share!

The place should be completely empty due to its very harsh environment, located in the middle of nowhere. But it is an amazing oasis where families seem to live in peace and harmony, cultivating dates. It is remarkable to find quite a place, and you will understand how magical it is when looking at it from a satellite. Like a tree finding precious water in a desertic land. 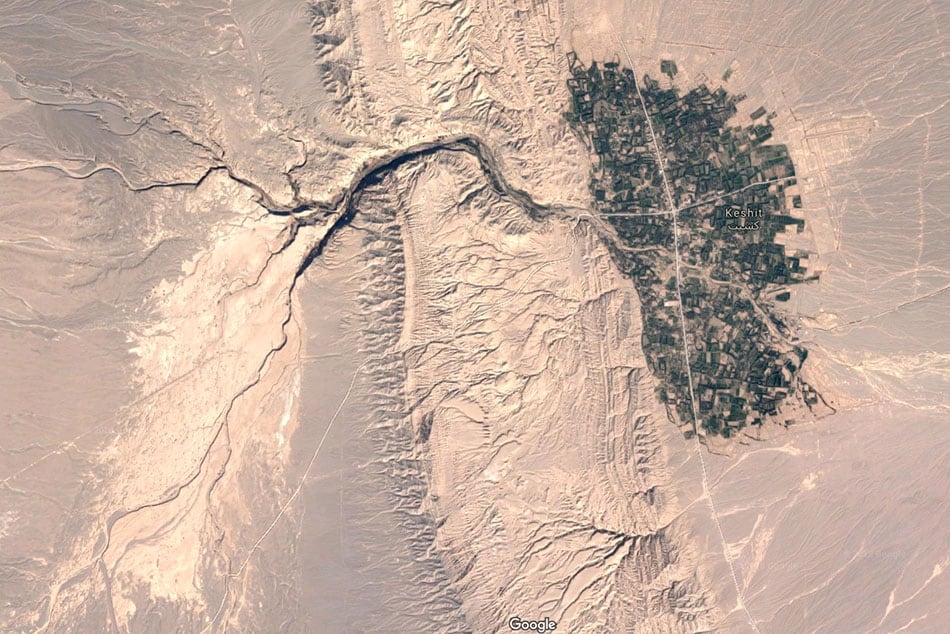 If you ever plan to visit Keshit without me, please make sure you stay away from climbing the houses and fort. The walls seem to be extremely fragile and tripping over a step is enough to break it. Be respectful of the place and its people so to preserve this site intact for the other photographers you may tempt to visit. Also, I know just the guy who could take you there. He organized the whole trip, including camping and food, and surely knew the area. His name is Massoud and his email msd.adiban@gmail.com.